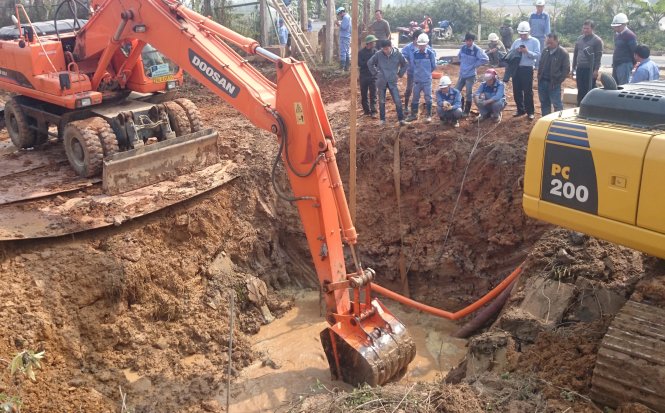 The Vietnamese government has requested that a Hanoi water company suspend a scheduled contract signing with a Beijing-based pipe supplier, responding to an appeal from the administration of the capital city.

Viwasupco has come under public fire for selecting a Chinese supplier for the Song Da Water Project - Phase II, a project considered crucial for numerous urban areas in Hanoi.

According to the VND588 billion (US$26.25 million) contract, Xinxing Ductile Iron Pipes Co. Ltd. was set to supply ductile iron pipes for the 21-km Song Da pipeline before the Hanoi administration called on the government to ask the project developer to not sign the contract with the Chinese supplier on Tuesday.

The Government Office accepted the request in a dispatch sent to the Hanoi administration and the Ministry of Construction on Wednesday.

Under the government order, Viwasupco is required to review all relevant technical issues of the project.

The government also tasked the Hanoi administration and the Ministry of Construction with requiring Viwasupco to ensure the project will “meet all standards to supply clear water to the capital’s residents.”

Many Vietnamese have noticed a trend of Chinese contractors bidding low to win contracts and later asking for more money, citing unexpected cost overruns. Chinese-contracted projects in Vietnam also have a reputation for tardy completion, another contribution to cost overruns.

These observations, combined with a bid of nearly 12 percent below asking price, have fueled concerns from members of the public that feel worried that Xinxing is just another shady Chinese contractor.

The Song Da Water Project transmits clean water from the Da River Water Plant in the northern province of Hoa Binh to Hanoi.

The second phase of the project intends to supply clean water to the Son Tay, Hoa Lac, Xuan Mai, Mieu Mon, and Ha Dong areas in the capital city.