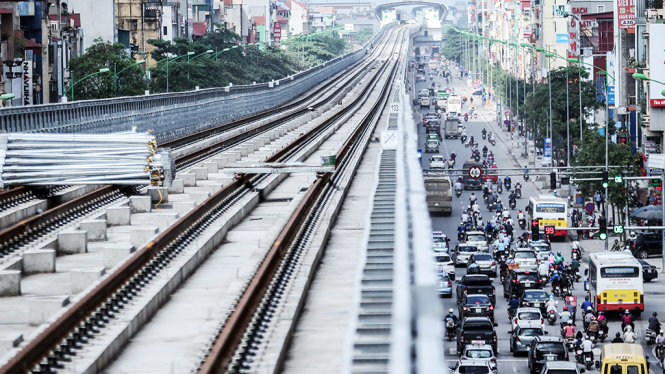 A private investor has proposed spending over US$4 billion on developing an urban railway system in Hanoi.

Property conglomerate Vingroup and Hanoi authorities closed a memorandum of understanding on the massive project, worth some VND100,000 billion (US$4.41 billion), during an investment conference attended by Prime Minister Nguyen Xuan Phuc in the capital on Sunday.

According to the document, Vingroup will develop different sections of five main urban railway routes in Hanoi, including ones connecting the Noi Bai International Airport with the Nam Thang Long and Phu Dien neighborhoods.

The other sections of these five routes have been planned to be developed using capital from the state budget.

Besides Vingroup, other private investors have also offered to join in the development of those railway services.

The Vingroup-proposed megaproject is now pending approval from the Hanoi administration and no further details were disclosed at Sunday’s conference.

An elevated railway system, built by a Chinese contractor, is under construction in the capital, running between Cat Linh Ward in Dong Da District and Ha Dong District.

During Sunday’s conference, memoranda of understanding for 14 other projects were also signed. These include a $1 billion investment on a hi-tech and supporting industrial park in southern Hanoi, and another $50 million to build an administrative school.

Speaking at the event, PM Phuc hailed Hanoi as the country’s “leading locality in synchronized urban planning and construction.”

“Hanoi is on the right track for mobilizing up to 80 percent of the capital needed for development from the private sector,” the premier remarked.

“If the capital keeps on this path, Hanoi will soon become home to the best traffic infrastructure in Vietnam.”