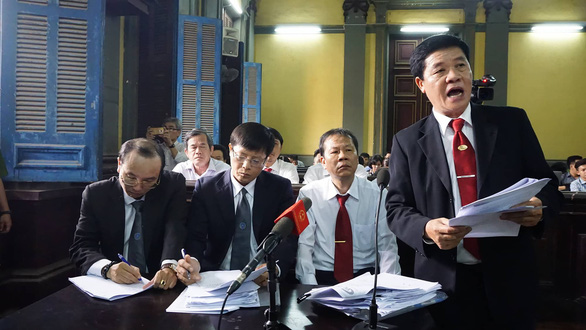 A court in Ho Chi Minh City on Monday once again adjourned the suit filed by local taxi firm Vinasun against ride-hailing service Grab, which the cab company accuses of unfair business practices, and announced that the trial would resume on November 22 after more evidence is collected.

A company hired to evaluate Vinasun’s claimed losses was not present at the court to clarify important details in the case that could affect the entire trial, the judges said.

There was a large crowd of drivers employed by Vinasun and Mai Linh, another well-known taxi company in Ho Chi Minh City, outside the court on Monday, anxious to know the outcome of the suit, according to the Vietnam News Agency.

This was the third adjournment since the lawsuit was first heard in February 2017.

Vinasun, once a dominant player in southern Vietnam’s taxi market, has seen its market share gradually dropping since Grab and Uber’s arrival in 2014.

Around 2,700 of its taxicabs are now idle because of the “unfair” competition, it claims.

Vinasun said the “illegal” operations of Grab in Vietnam were to blame for a fall in its revenues by VND41.2 billion (US$1.76 million) in 2016 and 2017, compared to how much it would have earned without the rival.

A Vinasun spokesperson said Grab had exploited the lack of clear regulations for software-based transport services in Vietnam to offer “rampant” promotion deals and discounts, including “zero-fee” trips.

Around 74 percent of Vinasun’s customers have already switched to Grab, Vinasun complained, citing a survey done by a market research company.

Vinasun said while it needs to comply with 13 regulations imposed on taxi companies, Grab has to follow only three for being categorized as a tech company, creating unfair competition.

Last week, the People’s Procuracy in Ho Chi Minh City said there is enough evidence to prove that Grab is a taxi company and advised the court to rule in favor of Vinasun in demanding that Grab pay a hefty compensation bill of $1.76 million.

Jerry Lim, Grab’s CEO in Vietnam, said the procuracy had no business putting a label on a company.

He had earlier penned a letter to Vietnamese Prime Minister Nguyen Xuan Phuc expressing his concerns about a draft regulation that looked to define Grab and similar services as taxi operators.