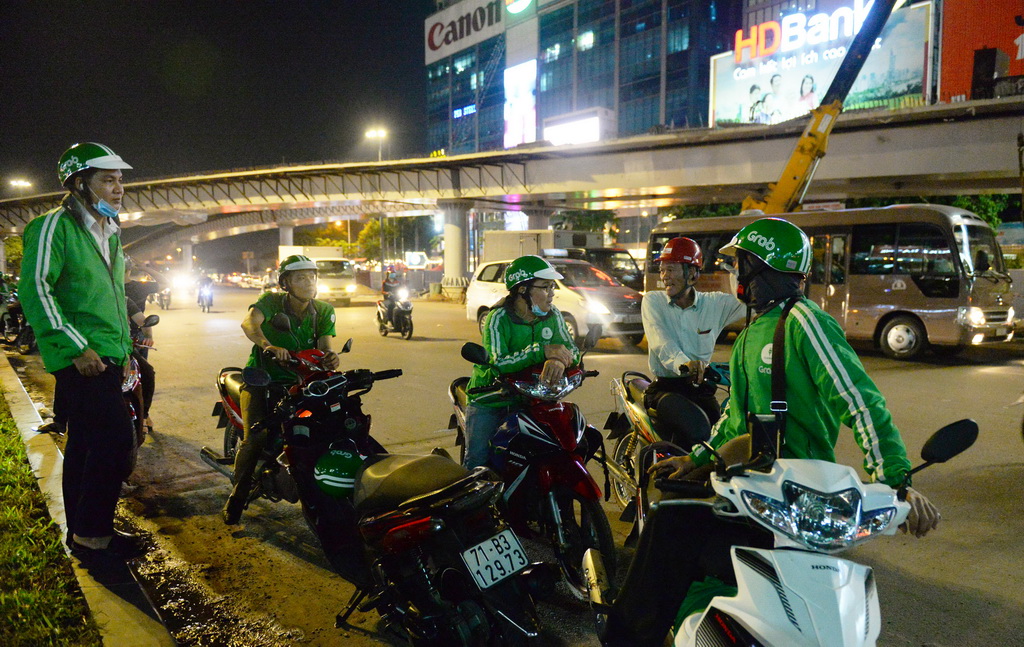 Editor’s note: The author of this op-ed piece is Nhiep Phong, a college lecturer in Ho Chi Minh City.

App-based ride hailing companies Uber and Grab have given rise to ‘grave degradation’ in the mindset of young Vietnamese, with too many turning to this type of ‘unskilled’ work.

This paints a bleak picture for the country’s future.

Every day as I drive around the bustling metropolis of Ho Chi Minh City, I see large groups of Grab and Uber drivers clustered together, most of them in their early twenties.

For the most part, these are young men who’ve had the privilege of a tertiary education, and represent what local media have also recognized as a worrying surge in this type of employment amongst young people.

It’s a scene repeated in Hanoi.

Rather than seek employment that utilizes the knowledge and experience gained at college, they are turning to the less demanding job of delivering people from A to B.

Making a living without the support of parents is tough for college students who live away from home. Much to the relief of many of them however, driving people has become an easy way to make ends meet.

A college student working part-time as an Uber driver can earn as much as VND4 million (US$175)/month, which is significantly more than working part-time as a private tutor, waiter or teaching assistant. For those prepared to go full-time, they can earn up to four times as much, with some drivers regularly pocketing monthly salaries of around $700.

This is fine for providing a temporary financial boost during college. Unfortunately for Vietnam, too many graduates are also taking to the road.

This can be directly attributed to the ongoing imbalance between the number of skilled jobseekers that training institutions deliver, and the lack of demand for them in the current labor market.

Public data from 2016 revealed there were 471,000 unemployed skilled workers in Vietnam, 42 percent of the total number of unemployed nationally.

Reports have also pointed out that most college graduates are forced to take up work that is unrelated to their field of study.

Others are lucky to be able to pursue their dream career, but must survive on a salary that gives them little room to breathe.

For example, a newly recruited law officer in Quang Ngai Province reportedly earns VND2.5 million ($110)/month full-time, which translates to an annual income of $1,320, only slightly more than half of Vietnam’s 2016 GDP per capita of $2,185.69, as reported by the World Bank.

To bring that number into focus, the same law officer could earn a maximum monthly wage more than six times higher if he or she was to join Uber!

After becoming hooked by the lure of easy money, work previously considered temporary quickly turns permanent, meaning young people forego their training and with it their potential to contribute fully to society.

The job of driving people deteriorates the mind, as it demands no critical thinking, creativity or competitiveness.

Answer me this: do Uber and Grab drivers have to use reason at work?

Perhaps, it could be argued, they use their brains to figure out the quickest routes around town, and employ logical thinking over whether or not to jump the red light right, or encroach upon the sidewalk to cut down travel time.

However, it’s my bet that their brain cells quickly become dulled as their minds switch over to a ‘safe state’ where they are never forced to think outside the box.

To a Grab driver, everything is set and done. The only thing that’s left for them is the physical work of delivery.

To make matters worse, even the key impetus for growth, competitiveness, is missing.

Unlike most industries where staff roll up their sleeves to keep customers happy, the app-based xe om drivers have an endless supply of customers.

Yes, they still need to be polite and punctual (users can give them a one-star rating at any time), but the job will ultimately reduce people’s willingness to improve themselves.

Uber and Grab were originally designed for people to take advantage of their vehicles in their free time. Somehow, young Vietnamese have taken to it like ducks to water, or should I say like fireflies to flames?

In developed countries, transporting people is a job for the elderly, or those who cannot keep up with a competitive labor market. In Vietnam, the job has sadly been taken up in droves by the very people most capable of innovating for the benefits of the country.

Perhaps their most important contribution is ensuring that those who are more capable will get to work on time.

As the British comedian Michael McIntyre said in one of his shows several years ago: “What a waste of life!”

Personally, I have every reason to believe that this massive ‘brain drain’ will become detrimental to the development of Vietnam.

Do you agree or disagree with this opinion? Tell us at ttn@tuoitre.com.vn.