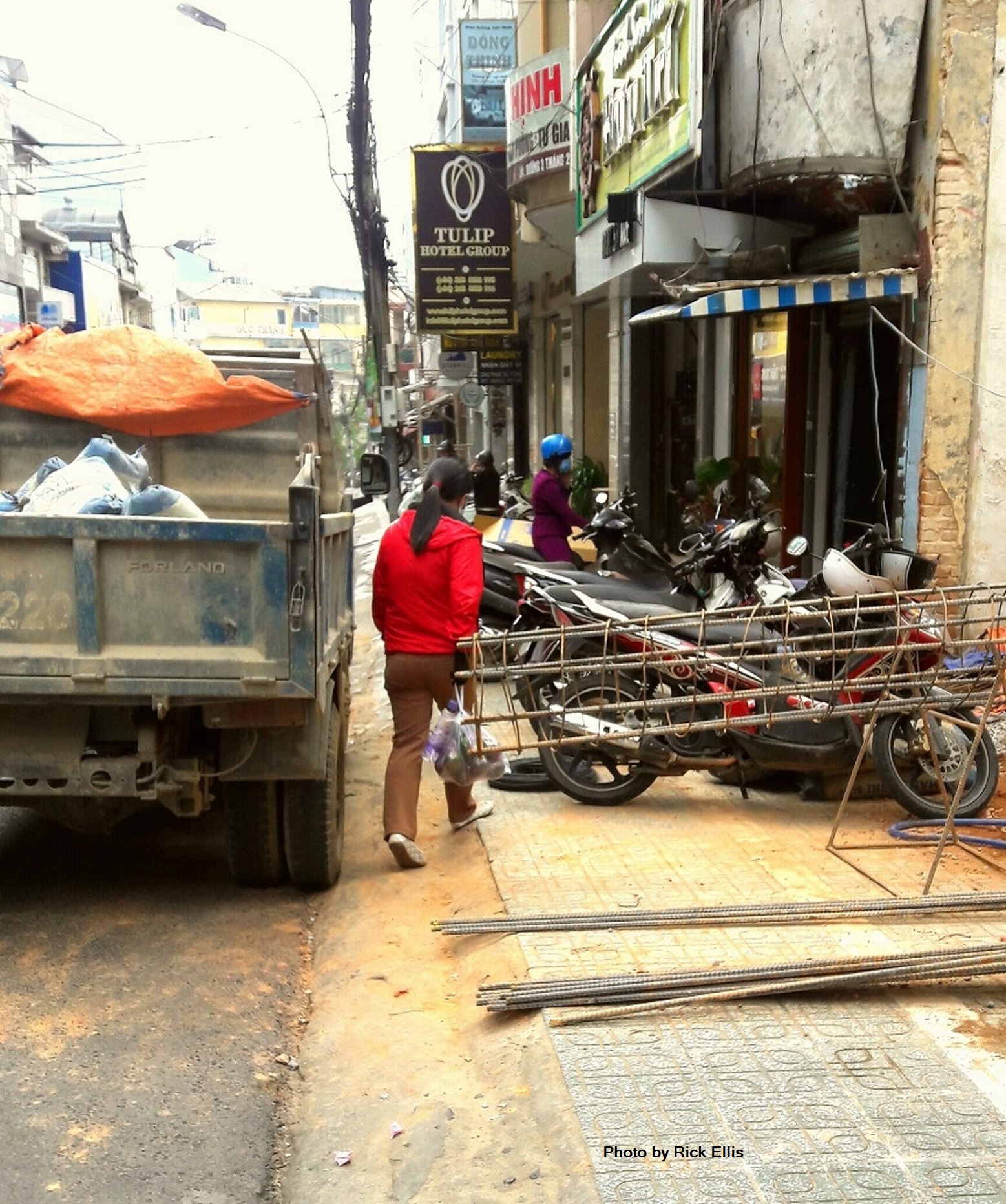 The feedback I get from readers is absolutely priceless:

* “Are you told to write only positive things about Vietnam? (Never…)

Let’s look at a few of the more charming local customs, those that highlight the unpretentious beauty of daily life in Vietnam.

This configuration brings the business nearer to potential customers, which is always a plus, and frees up the shop for product inventory, cooking, eating, sleeping, babysitting, drinking coffee, guzzling beer, and raucous card games.

Some have tried to rectify the situation, most notably the valiant ‘Captain Sidewalk,’ an official in Ho Chi Minh City who took on the challenge of cleaning up the sidewalks. Ultimately, he tendered his resignation upon realizing he’d never succeed, primarily because residents enjoy the mess exactly as it is.

We love it! I swear the day this place turns into Singapore, I’m outta here.

We hop, skip, and vault over obstacles, getting much needed exercise while trying to walk around, meeting lots of people, and having a ball doing so.

I have perfected the ‘3/4 fruit vendor pike,’ deftly leaping and spinning over a crouching seller, and the ‘welding flash jab,’ a Hapkidoesque movement involving a sudden flick of the arm to shield my eyes against such flashes and flying sparks, akin to a rugby straight-arm.

Annoying re-re-reconfirmations of meetings: This one was a pain in the ass until I began arranging meetings with locals exclusively in places where I like to go anyway, whilst pretending to the other party that I was going for the express purpose of meeting them.

So far, so good, then this:

Phone rings half an hour before our meet…

Me: Just about to say hello, caller cuts in.

Caller: “Where are you?”

Me (thinking): “Silly, going to meet you. Where did you think I was?”

Caller: “On your way to where?”

Me: “Going to the place we agreed upon.”

Me: Just about to say hello, caller cuts in.

Caller: “Where are you?”

Me (thinking): “Neurotic much? Did you think I got hit by a truck during the ten minutes since we last spoke?”

Me (aloud): “In the café waiting for you. Where are you?”

Caller: “On my way.” (Rubbish, the person is still at home, that’s an old trick.)

Driving: Almost any foreigner could pen a tome the size of War and Peace about experiences on the roads in developing countries. All such places have their own driving peculiarities and Vietnam is no exception.

In these parts, it’s like bumper cars, except instead of trying to hit each other, everyone tries to miss, peppered with sporadic ‘who blinks first’ dares, and you know the rest.

Everyone is in an incredible hurry, so they ignore everything and stare straight ahead like those pilots in scary old war movies, zeroing in on a target, oblivious to all beside and behind.

The one driving maneuver that amuses me most is the classic Vietnamese U-turn, invariably performed right in the middle of dense traffic.

Instead of executing the customary three-point turn or proceeding to the next intersection and turning around, an agonizingly slow six-point turn is made at the biggest choke point when it’s totally jam-packed with traffic.

The reason for the three additional (and redundant) moves and the gingerly manner in which they are executed is most drivers grossly overestimate the size of their vehicle, so they think they’re about to bump into something when in fact they’re half a football pitch away from any object.

The excessive caution employed is not based on fear that drivers might damage anything around them, rather they’re worried about denting their own vehicle.

Looking at the cost of cars here, I must say I can’t blame them.

Plumbing: Vietnam punches far above its weight in this category, demonstrating the ingenuity and resourcefulness of the locals.

Fact is if you flash the cash, some clown who thinks he knows plumbing, or believes you don’t realize that he has no clue, will magically appear out of nowhere to relieve you of some cash.

Although the tune may vary, it’s the same dance from Hanoi to Honolulu and everywhere in between.

The prevailing plumbing style in Vietnam is for laborers to pick up a few hundred meters of PVC pipe then begin connecting it in an artistic fashion to the water supply, bypassing the design phase.

Blue pipe is ideal because it highlights the workmanship better than boring old gray.

A labyrinth-like network of T-junctions, joints, angles, and twists reminiscent of a plate of linguine is then constructed, winding around every joint and corner in the toilet from floor to ceiling, until, probably by divine intervention, fresh water flows in and waste water ends up on the shoes of those using urinals and sinks.

Last grain of salt: This item originates from days gone by when there was little to go around, so needs had to be prioritized and cash allocated to the most critical items each day, which, sadly, still applies to many people in Vietnam.

Despite all the significant progress made to date, the concept of ordering in advance usually does not resonate among locals. Believe me, I’ve tried everything short of slipping drugs into people’s drinks to convince them to plan consumption in advance, but it’s like peeing into a stiff gale.

Therefore, only when the last morsel of salt or rice, splash of oil, or clove of garlic is consumed can one then initiate replenishment, and not a single second before.

Thus, if you do venture into a local kitchen and find pots on the boil and ingredients strewn about but nobody present à la Marie Celeste, fear not, the cook ran out of something right in the thick of things and bolted for the nearest corner store.

Interrogation: Given the unceremonious behaviour of many foreigners both past and present in this country, it’s little wonder the locals want to keep tabs on us.

Hell, if this was my country with its history of scandalous invasions, I’d have a pack of trouble-sniffing bloodhounds following every foreigner.

In addition, most locals have no first-hand experience abroad, so they’re naturally curious about visitors, especially in view of the weird things we do.

We can mitigate this issue by carrying around translated copies of our full curriculum vitae and circulate it among interested parties as we stroll through town, similar to grocery store leaflets handed out en masse.

Cutting queues:This charming custom is practiced indiscriminately, with both locals and foreigners victimized without prejudice. It’s basically the Vietnamese equivalent of the guy who tries to crash the Express line in a supermarket back home with 13 items when only 10 are allowed.

Although they feign innocence, queue-jumpers know exactly what they’re doing and we know that they know, so confrontation is a viable yet time-consuming option, therefore defeating the purpose. The best defense is to distract them, then nimbly retake our rightful place whilst ignoring the jumper completely.

As strange as some of these idiosyncrasies may seem to foreigners, there is often a method to the madness. The sidewalk is breezier than the shop and does indeed bring the business closer to customers. Similarly, why drive half a kilometer just to turn around and go back to the point of origin if you can do it on the spot?

It’s all academic since there are only two ways forward, either:

We get used to these customs and laugh with the locals, or

We don’t, and are slowly driven to insanity.

So, fellow foreigners, kick back and enjoy, because the only thing that’s going to change is us.