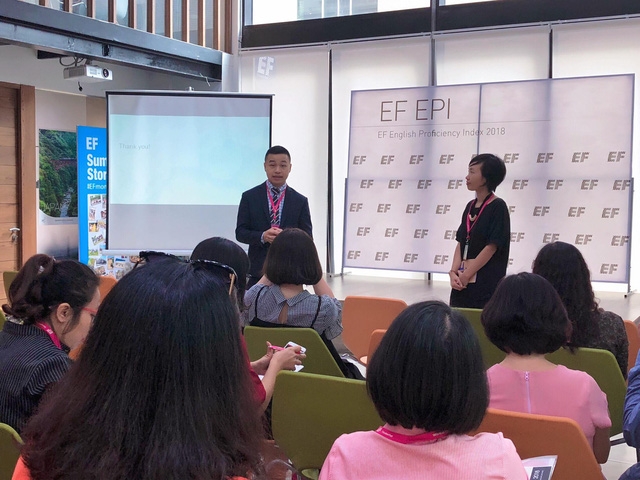 Vietnam ranks just above the global average in its proficiency in using English as a second language, according to the 2018 English Proficiency Index compiled by international education firm Education First (EF).

The country has consistently maintained its “average” proficiency level since the 2016 EF survey. Its competence level improved from ‘very low’ to ‘low’ between 2011 and 2015.

The information provided by EF during a press conference on Wednesday.

Vietnam ranks 41st out of 88 countries and regions included in the EF’s survey, and seventh amongst 21 Asian nations and territories involved.

Vietnamese respondents’ scores increased from 54.60 in the 2017 survey to 55.45 in 2018, suggesting progress in the country’s English learning.

Eight out of the top ten countries in EF’s 2018 English proficiency rankings still come from Europe while Singapore ranks third, making it the only Asian country in the top three.

Cao Phuong Ha, director of EF Vietnam, said Vietnam should focus on improving the quality of its teaching and change its general attitude toward English, from considering it as a school subject where students solely concentrate on getting good marks to regarding it as an essential obligatory language for integration into the rest of the world.

The present EF English Proficiency Index deploys data from over 1,300,000 test takers worldwide who took the reading-and-listening test by EF online in 2017.

The results tell nothing about the other macro-skills and are biased toward respondents interested in English study and younger adults, who constituted the test-taking population.

The surveyed group was not necessarily a fair representation of the overall population, as the index admitted.

The suspected cases include 151 test-takers and 15 staff members