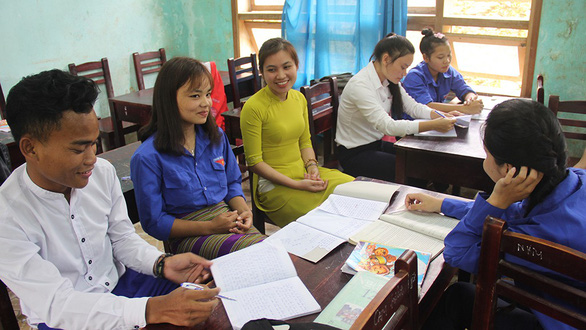 Teachers in a central Vietnamese province are fighting arranged marriages that are still a practice in rural villages despite the law and cause many students aged 15 to 16 to drop out of school against their will.

Noticing that one of her students was no longer found in school, Nguyen Thi Tra My, a teacher of a school in central Quang Nam Province, asked around about her female student only to find out that Co Tu Poloong Thi Nghi Nghi has already left the region with her lover to make a living somewhere else.

Nghi is not a rare case in the rural villages of Vietnam, where getting married before a legal age is still commonly practiced.

In many instances, just a promise of a future together is enough for students to drop out of school while believing that their life would turn to a new chapter, teachers in Tay Giang District, located near the Vietnam-Laos border, said.

Such marriages are not always arranged, they added.

Even though the law states specifically that male citizens need to be over 20, while females need to be over 18 years old to get married, many students originating from ethnic minorities and rural villages are still found dropping out of school because of forced marriages.

Shocking to many teachers

Quitting school to get married is most commonly seen among students aged 14 to 15, or even younger, when many consciously make nuptial decisions while others are forced into arranged marriages despite the objection of the bride-to-be.

Teachers of Tay Giang High School in the namesake district are already used to having their outstanding students suddenly disappear, leaving behind an empty score sheet while their names are still in the school’s database.

“Every year, we have to deal with numerous cases of students dropping out of school, but the most heartbreaking instances are still the ones that abandon their education to get married,” headmaster of the school Dinh Van Tu said, indicating that in the rural areas of Vietnam it is still uncommon to finish all 12 years of the standard curriculum.

A case in point is a female student who came from a small village near the Vietnam-Laos border and had to travel for quite a long distance just to reach her school, which is located in the center of Tay Giang.

“I just want to be studying instead of planting seeds like others in my village,” Aral Mai Tinh, vice-headmaster of Tay Giang High School, quoted her former student as saying.

Having noticed that the female student was unhappy, her teachers soon learnt that their precious student had already been required by family to marry a man from her village since birth without her consent or knowledge.

The groom’s family decided that it was time for the couple to start their life together as husband and wife, even though the bride had not finished high school yet.

In protest, Tinh took the female student in to live with her so as to shelter the girl from old-fashioned practices of the village and the tribe.

“Even though she was staying in my house, the groom’s family and the villagers still came looking for her,” the teacher recalled.

“Tension rose as many people showed up to force the illegal marriage.

“In the end, my student and I had to give in and move in with her groom, leaving the books and school supplies with her teachers.”

Some time had passed before Tinh came to the village looking for her student only to find a much more mature female farmer with a newborn baby in her arms and her eyes filled with indescribable sadness, the vice-headmaster said.

An illegal practice that is difficult to change

Rules within a tribe and a village are oddly powerful, Tay Giang teachers admitted.

While it is already outlawed, changes come slowly as people are still more bound by their own tribe.

Teachers’ patience is the most important feature that can make a change, the headmaster Tu said.

“As teachers, if we do not help our students change their perception such tragic scenarios will keep repeating themselves for thousands of generations,” he added.

Besides the cases where teachers’ interference could not change the unfortunate fate of these students, many have helped keep students from quitting school.

At least the students were able to finish 12 years of their basic education, Tu said.

One of such cases is a 12th grader who was about to suspend her studies to get married.

Having learnt of this, the headmaster called local authorities to have parents come to the school so that the teachers could prevent the illegal practice, resulting in the postponement of the marriage.

Thanks to the teachers’ efforts, the number of students dropping out of high school for nuptials has seen its downfall over the years, with some cases still continuing their studies even after such marriage.

“Currently we have two married couples who are also students at our school,” Tu said, adding that one couple is living together as per their tribe’s tradition while the other only comes to the husband’s house at the end of the week.