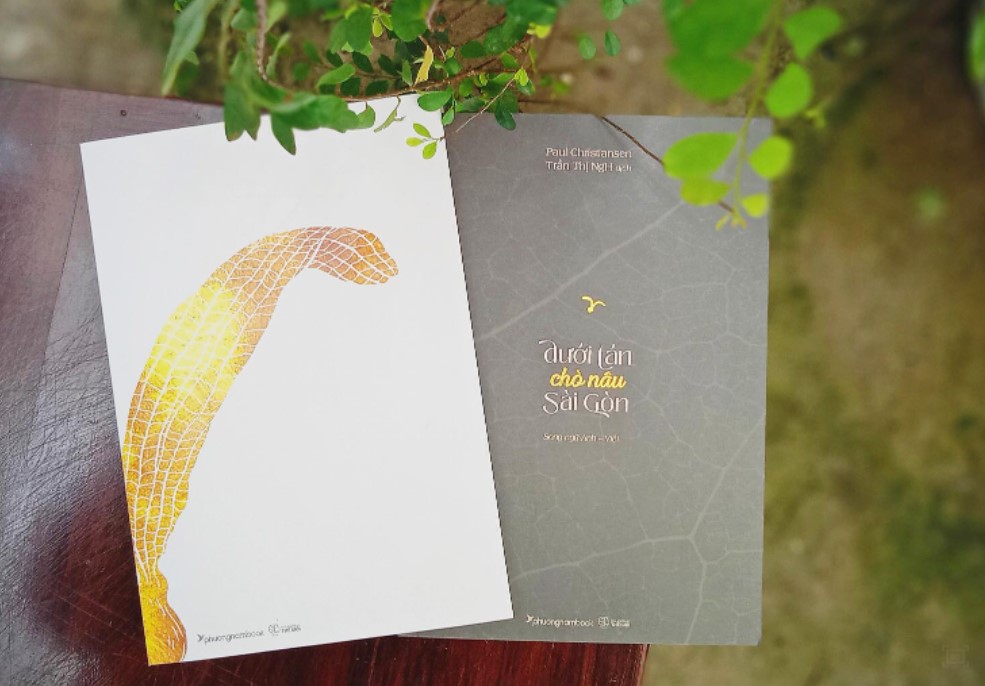 Paul Christiansen’s Beneath Saigon’s Chò Nâu offers insights into the deep love the author has nurtured for Ho Chi Minh City during his six years as a resident.

Beneath Saigon's Chò Nâu, to be published later in 2022 by Phuong Nam Cultural Corporation and The Gioi Publishing House, is a bilingual anthology of essays on Vietnam.

Through these essays, written in both English and Vietnamese, readers are offered insights into Paul Christiansen's perspective on Ho Chi Minh City and the gratitude he has developed toward his adopted home.

During his time in Ho Chi Minh City, Christiansen’s unwavering love for the city, despite its flaws, is highlighted most in his essays On Loving the Saigon Zoo Despite its Flaws and In Defense of Saigon’s Most Neglected Museum.

"I would like to think of these essays as love letters because I am very lucky to live in Saigon and make Vietnam my home," the American writer said in an interview with Tuoi Tre (Youth) newspaper, referring to the old name of Ho Chi Minh City.

"There is no place that is perfect.

"Like everyone, every place has flaws and many things that need to be improved, but there are already too many negative things in the world.

"Why should I create more, especially since we have many other wonderful things to praise?"

This feeling is what 'pushed' him to show his gratitude toward Saigon, its icons, and its people, said Christiansen, a former Fulbright scholar.

"I rarely show my sadness or anger about anything related to Vietnam, only my love and respect for the country. I am really lucky to live here and be so welcomed," Christiansen said.

Beneath Saigon's Chò Nâu also instills readers with an intense sense of the author's passion for nature and animals, as well as his desire to fight climate change, as shown in his essay An Invasive, Destructive, Beautiful Aquatic Villain.

"In fact, I find it more interesting to live in nature than in the human world, which is smaller and more limited," Christiansen said.

"I am a human being, and humans are a part of nature.

"This is a problem that is not easy to understand, but in my opinion, art is our best tool.”

A bridge to Vietnamese literature

Aside from merely a poet and essayist, Christiansen is not shy about claiming his work to be a "little bridge” between American and Vietnamese literature.

"I am a little proud that in May I got to co-create a literature project called In My Ear, Your Voice Still Flickering," Christiansen said, referring to a recently published anthology of works by 20 Vietnamese poets, writers, translators, and artists.

In My Ear, Your Voice Still Flickering was released on April 29 at the Miami Book Fair, one of the largest literary festivals in the U.S..

"For me, introducing Vietnamese literary talents to Americans is more important than publishing my works," he said.

Much of the creation of In My Ear, Your Voice Still Flickering is owed to the connections Christiansen has built in Vietnam over the past six years.

Christiansen also has several other projects in the pipeline.

"I have finished translating some Vietnamese novels as a co-translator and they will be published soon. However, I cannot reveal what they are about yet," he told Tuoi Tre.

Aside from his personal projects, Christiansen also serves as the content director for Saigoneer, an online media company which specializes in social and cultural news related to Ho Chi Minh City.

As part of his work for Saigoneer, he authors book reviews on Vietnamese novels.

"I consider the book reviews a core part of the website because they have a profound impact on the community of real readers. In my opinion, this is what makes Saigoneer's unique value," he said, adding that these book reviews play into Saigoneer’s greater objective of diversifying its readership.

"There is already so much feedback abroad on such famous books as The Mountains Sing by author Nguyen Phan Que Mai, but our site can provide a distinct perspective that shows how the work is judged by readers who also have a good knowledge of Vietnamese culture.

"We also hope to introduce some authors who are not really known internationally yet, such as Da Ngan, to foreign readers.

"Likewise, we want to make many Vietnamese writers who live abroad, like Kim Thuy, who are famous overseas but little known in Vietnam, better known in the country.”

Christiansen believes that stories about food, travel, movies, and music attract both writers and readers to Saigoneer.

Moreover, poems and works of fiction help to create a deeper connection with audiences.

"I imagine that one day there will be as many people reading a Vietnamese book as there are people eating a bowl of pho."

According to his biography on Paulchristiansen.net, Christiansen earned a BA from St. Olaf College and an MFA from Florida International College.

He is the author of Beneath Saigon's Chò Nâu, a bilingual collection of essays.

He is also the co-editor of A Rainy Night in the City, a bilingual anthology of short stories.

His poems have appeared or are forthcoming in Atlanta Review, Best New Poets, Pleiades, Quarter After Eight, Threepenny Review, and Zone Three.

A former Fulbright scholar, he currently resides in Saigon and works as a content director for Saigoneer.