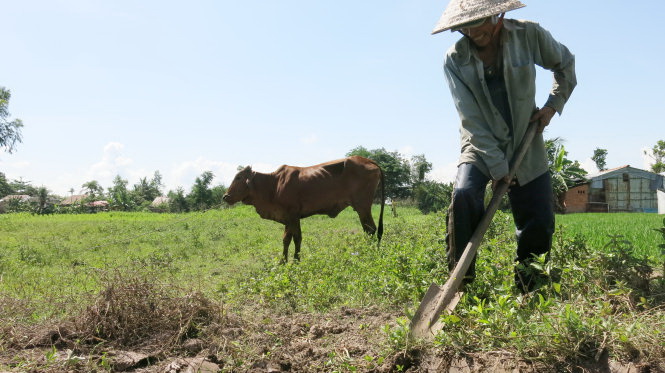 People in the once-famous granary of the Mekong Delta are abandoning the grind of country life for better-paying jobs elsewhere.

Several thousands of penniless farmers and unskilled workers, including those in their 60s, from each of many Mekong Delta provinces, are leaving their barren fields and families behind for job opportunities in major cities, industrial zones and emerging resort towns.

Whole areas of the countryside are now made up almost exclusively of the elderly and the very young.

The residential quarter along T29 Canal in U Minh District, Ca Mau Province, was an in-demand location around 10 years ago, with all the necessary infrastructure in place to serve locals’ daily needs.

It is an entirely different story now, however.

Nguyen Tien Hai, chair of the provincial People’s Committee, said that sadly many local households had abandoned their paddy fields which had become contaminated with growing amounts of alum.

Bui Be Tam, one 35-year-old resident, lamented that her family had suffered heavy losses on their 2,000-square-meter paddies because of the impoverished soil condition and inclement weather over the past several seasons.

He has continued to struggle to make a living at times, however.

Luc recently returned home with only one U.S. dollar in his pocket, forcing them to consider a move to a neighboring town for the chance to make a better living.

Tran Quoc Viet, a local official in Nguyen Phich Commune, U Minh District, revealed that dozens of entire families had moved, while countless others have been forced to live separately from their one or two breadwinners.

Another poor neighborhood, Long Phu Commune in Long Phu District, is known for its high rate of migration to Soc Trang Province.

During the salinity crisis of 2016 alone, it is estimated that more than 6,000 residents relocated for better job opportunities, however the real statistics could be even higher.

Front doors across the commune have been shut for months.

Son Sil, 60, said that he was looking after a plot of land abandoned by one of his friends and tending to his three young grandchildren after their parents found jobs as workers at garment companies in Binh Duong Province, approximately 30 kilometers from Ho Chi Minh City.

Lam Thi Thuy, 53, said she had gathered a team made up of the middle-aged and elderly who now work as hired hands for field owners.

“Our bosses have no other choice but to hire us in order to make their soil arable or harvest crops as all of the young people have left,” she explained.

Dang Thanh Quang, vice chair of Tran De District People’s Committee also in Soc Trang, said the local administration was providing farmers with support in salinity-resistant seedlings and soil reclamation, and had persuaded them to summon their relatives working away in time for the coming harvest.

Youths are hard to come by in many localities across the Mekong Delta, with only the elderly and kids left behind. Photo: Tuoi Tre

According to Tuoi Tre (Youth) newspaper’s findings, the majority of rural youths have left their hometowns for manual jobs in cities and towns located to the east of Ho Chi Minh City.

Phu Quoc Island, a paradise retreat in Kien Giang Province, which has transformed from a rough diamond into a polished pearl, and a magnet for major domestic and international investors, has also been a draw for migrant workers.

The island has received thousands of new arrivals from neighboring provinces as demand for manual workers at mushrooming construction sites has surged in response to the boom in tourism.

Even ‘retirees’ cannot resist the temptation.

Tran Van Nhu, 60, from Can Tho City, and dozens of laborers his age now scrape together a living as construction workers in Phu Quoc.

“Even the elderly are getting harder to come by in my neighborhood. Only children are around in the deserted villages,” he said sadly.

Tran Van Ut, 42 and Van, his wife, residents of An Bien District in Kien Giang, have worked as construction workers in Phu Quoc for 10 months now.

Van said the couple had not visited their two children at home for almost a year, though it takes them only three hours by boat to reach home.

Preliminary statistics by labor management agencies in several Mekong Delta provinces reveal that up to 26,382 internal migrants left Ca Mau for jobs in other provinces during the first 10 months of 2016, while Soc Trang and Kien Giang have witnessed a mass migration of more than 10,000 and 20,000 new residents each year.

Apart from impoverished soil, a hostile climate and shrinking profits from crop and fish farming, people are tempted by reports of well-paid jobs from their relatives and neighbors who already work in these locations, according to Nguyen Tien Hai, chair of Ca Mau Province People’s Committee.

The local administration has provided farmers with assistance, including improving the quality of available land, and helped them switch from rice crops to other lucrative yields.

To stem the flow of people, however, the provincial People’s Committee has provided aid worth more than VND40 billion ($1.73 million) to disaster-struck, impoverished households, and plans to call for further outside investment in order to maintain the local labor force for the long term, he noted.

To many Vietnamese, sham marriages with Americans may not be the right move

Those involved have lost family members and large amounts of money