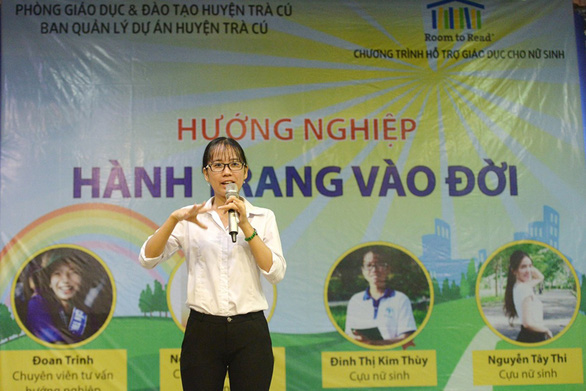 A Vietnamese woman has raised US$2.88 million through speeches at an event sponsored by the non-profit organization Room to Read, enabling thousands of female students in Vietnam’s Mekong Delta to rise above poverty through education.

At a Room to Read event in Hong Kong this past February, Dinh Thi Kim Thuy confidently spoke to an audience of approximately 200 potential donors, explaining the importance that their contributions could have on impoverished young women in rural areas of Vietnam’s southern region.

Thuy, a first-year student at Can Tho University in the namesake city, eventually managed to raise $2.88 million for children in her country.

Room to Read is a U.S.-based non-profit organization for improving literacy and gender equality in education in the developing world.

The organization, which currently operates in 16 different countries, first began working in Vietnam in 2001.

So far, the organization has built around 1,400 different libraries in 25 Vietnamese provinces and supported the education of over 6,000 female students from poverty-stricken areas in Vietnam’s Mekong Delta.

Much of the money Room to Read contributes toward its initiatives is raised at events where would-be donors listen to first-hand accounts from young women who have directly benefited from the organization.

Needless to say, the amount of money raised depends heavily on the speaker.

“She’s a professional speaker!” remarked Huynh My Ngoc, a Room to Read technical staffer who attended the event.

After hearing Thuy’s give her speech so confidently in English, few at the event could believe that she had the lowest English command among the Room to Read speakers that day.

“We have brought many female students who matured through the program to participate in fundraising events in Singapore, Sweden, Japan, and France, but none of them have ever had as little English as Thuy,” Ngoc said.

“However, she’s been our best speaker so far.”

Even more surprising is that Thuy wrote her speech herself, relying only on Room to Read employees to help correct any spelling and grammar mistakes.

Then, to prepare, she made visits to touristic areas near her dormitory in the Mekong Delta city of Can Tho to practice English by talking to foreign visitors.

The rest of her spare time was spent practicing her speech.

“Four generations of our family have been stuck in a vicious cycle of trying to make ends meet each day,” Thuy’s grandfather, Dinh Van Son, said about her family life in a rural district of Vinh Long Province.

Though both jobs were extremely labor-intensive and time-consuming, they did not offer enough income to cover Thuy’s school tuition.

Fortunately, when Thuy was on the verge of dropping out of school in sixth grade, Room to Read found her and offered their support.

“In addition to having Room to Read covering my tuition, clothes, and textbooks, I was given a bicycle,” Thuy recalled, adding that without the organization she could not imagine herself ever owning a bike.

Room to Read not only provided her with academic knowledge, but also taught her the soft skills necessary to succeed in life.

Moreover, the area Thuy grew up in Tra On District is known for having a significantly high number of young girls dropping out of school to marry Taiwanese men in hopes that they would help their family escape poverty with money fromt their would-be wealthy husbands.

“Many of my relatives stopped schooling early to get married to foreign men,” Thuy told Tuoi Tre (Youth) newspaper.

“I have not been able to do much, but I have many intentions for my future and always feel happy.”

Thuy added that she has never doubted the decision to pursue her education.

In addition to Room to Read’s support, Thuy has received a scholarship from Tuoi Tre when she finished high school so that she could leave her part-time jobs to focus on her studies at Can Tho University.