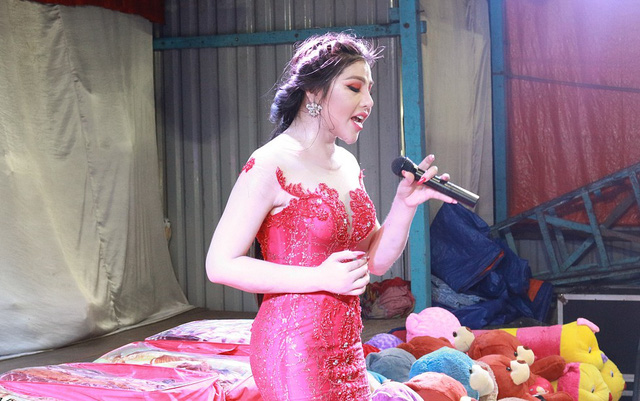 Nini An has achieved everything she’s wished for as a transgender woman - a happy family comprised of a husband who dearly loves her and a lovely adopted daughter.

Nini An, a popular name in the world of lo to, a Vietnamese style of bingo which features transgender people who call the numbers through songs, became a role model for the country’s Vietnamese LGBT community for the positive messages she has sent throughout her fairytale-like love story with her husband.

Nini met Chau Chi Cong on her first day singing for a lo to group and was immediately drawn in by his work ethic and warm-hearted personality.

Gradually, the two developed feelings for each other and Cong decided to ignore opposition from his parents and move in with An at her house in the Mekong Delta province of Long An.

After a year of living together, Nini visited her husband’s hometown and was surprised by the warm welcome from his family, particularly his grandmother – a strong woman considered to be the most unapproachable in the family.

“Besides my husband, I’ve never felt this loved and cherished by anyone before,” An recalled of the visit.

An and Cong eventually adopted a baby girl they met while An was taking care of her sick mother in the hospital.

An shared that her father passed away when she was young, and her mother was constantly worried about her future because she noticed that An was developing the same way as her siblings, particularly in terms of sexual orientation.

“I was really stressed about not being able to have babies like others and also felt guilty that Cong wouldn’t have children, so this felt like a miracle,” she said.

And with so much to be happy about, it’s no wonder that Nini An doesn’t let critics of her lifestyle get in the way of her happiness.

“I don’t know what will be waiting for me in the end, but my life right now proves that love does exist no matter what gender you are,” her eyes gleamed with happiness.

This story is the last part of a series of articles about Vietnamese who are not shy about their sex orientation and chose to get married against all odds.