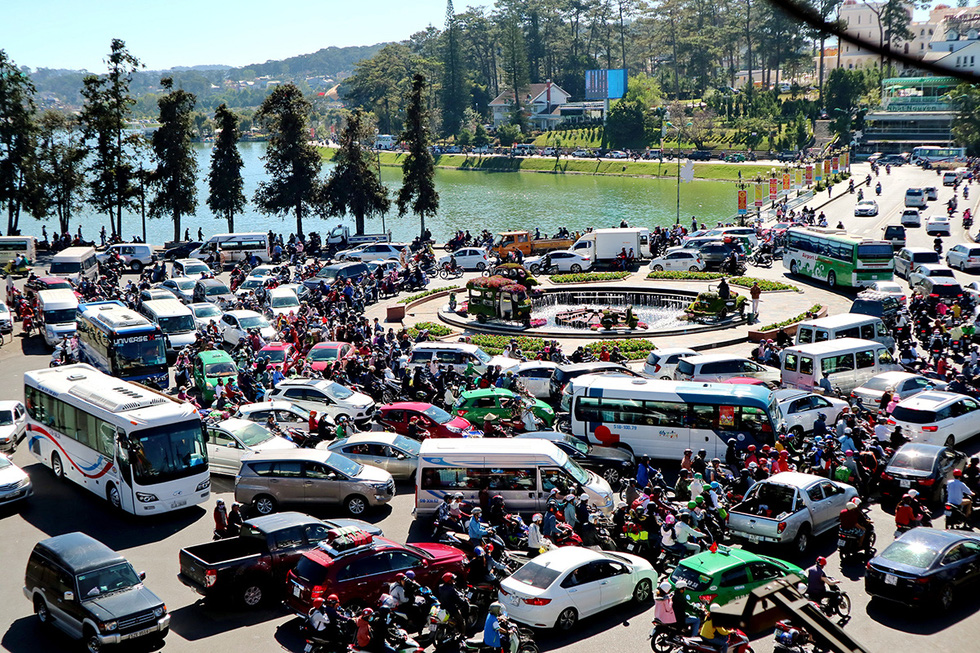 Visitors to Da Lat during the Lunar New Year holiday season are likely to find themselves facing one of the city’s longest infrastructure issues: traffic.

While a slew of planned projects, including the constructions of belt roads, have yet to materialize, local authorities are mulling pleas for a traffic light system to manage the ever-growing congestion issues facing the locality.

Motorbike collisions are common at the intersection of Phan Chau Trinh, Tran Quy Cap, and Quang Trung Streets in Da Lat. Typically, drivers who find themselves in an accident will pull themselves up, hurl a few insults at anyone else involved, and be on their way without actually settling the dispute.

Locals say that such common occurrences could be totally avoided if the city would seriously consider a traffic light system in lieu of the current system of ‘human stop lights’ – traffic police officers mobilized throughout the city to attempt to regulate congestion.

“It takes a team of twelve to mediate traffic at Kim Cuc and Hai Thuong junctions during holidays. We’re out there all day. From 6:00 am and 9:00 pm,” said Lieutenant Colonel Nguyen Van Hung, head of traffic police in Da Lat City.

“It’s very taxing for the team and there’s little we can do to actually help since all we have are whistles and batons. During peak seasons, we have to bring in ward-level police and provincial traffic forces to help us.”

According to Hung, the root of Da Lat’s traffic problems can be traced to a lack of coordination between vehicles, manpower, and technological systems.

“I decided to avoid going outside for days after that. Our family now stays home during the peak tourism days. We only go out in off-peak periods to stock up on food,” Nguyen shared.

“I think city authorities need a solution to this issue so that they can develop tourism without disrupting the daily lives of locals,” she added.

“The sound application [of urban planning] is a way to preserve the merits of all cities, including Da Lat. A lack of problem-solving for our issues will eventually bring us down,” said Nguyen Huu Tranh, a writer and Da Lat expert, during a recent exchange on preserving the historical values of Da Lat in a contemporary context.

In reference to the city’s traffic problem, Tranh shared that “During the 1950s, we would be told off by police if we violated [road traffic] laws. There was no traffic light, but the town’s population was so low that police were only needed at a few junctions. Traffic has since evolved, as if it’s two different worlds.”

Truong Huu Hiep, director of Lam Dong Province’s Department of Transport, said that relevant authorities did suggest that installation of traffic lights at three important junctions of Da Lat City in the past, but the plan failed to gain traction.

Now, however, as senior officials in the city see that other locales have built traffic lights with success, those who did not support the plan in the past seem to have changed their minds.

The installation of traffic lights is crucial, but we still need to figure out where we’ll put them,” Hiep said.

The city’s authorities are currently devising a detailed plan for traffic light installation, which will be presented to city residents for feedback. The plan will be part of the smart city system that the city is currently envisioning.

According to Le Minh Chien, president of Da Lat University, the absence of traffic lights is hardly an issue for locals who know their way around the city. Instead, Chien said, tourists who visit the city without understanding of local traffic are the cause of the chaos.

Da Lat has long been referred to as ‘the city without traffic lights,’ a small quirk that adds to the eccentricity of the place, said Nguyen Trung Hien, founder and director of the Da Lat-based art residency program Pho Ben Doi, also an activist with involvement in art initiatives and architecture preservation projects in the central highland township.

As Hien indicated, development pressure can erase that quirk from the city, but it can also open the window for future unique characteristics.

Attention to the small design details of traffic lights and ornamental lamps will render Da Lat a much more charming place.

It will appease the yearning for traffic light peculiarity of city residents and tourists, while also ensuring traffic safety.

This initiative, however, will require deep research from relevant agencies so that the city can maintains its reputation as one of Vietnam’s six Cultural Cities as named by the British Council, and eventually achieve the Asia-level ‘City of art’ title.