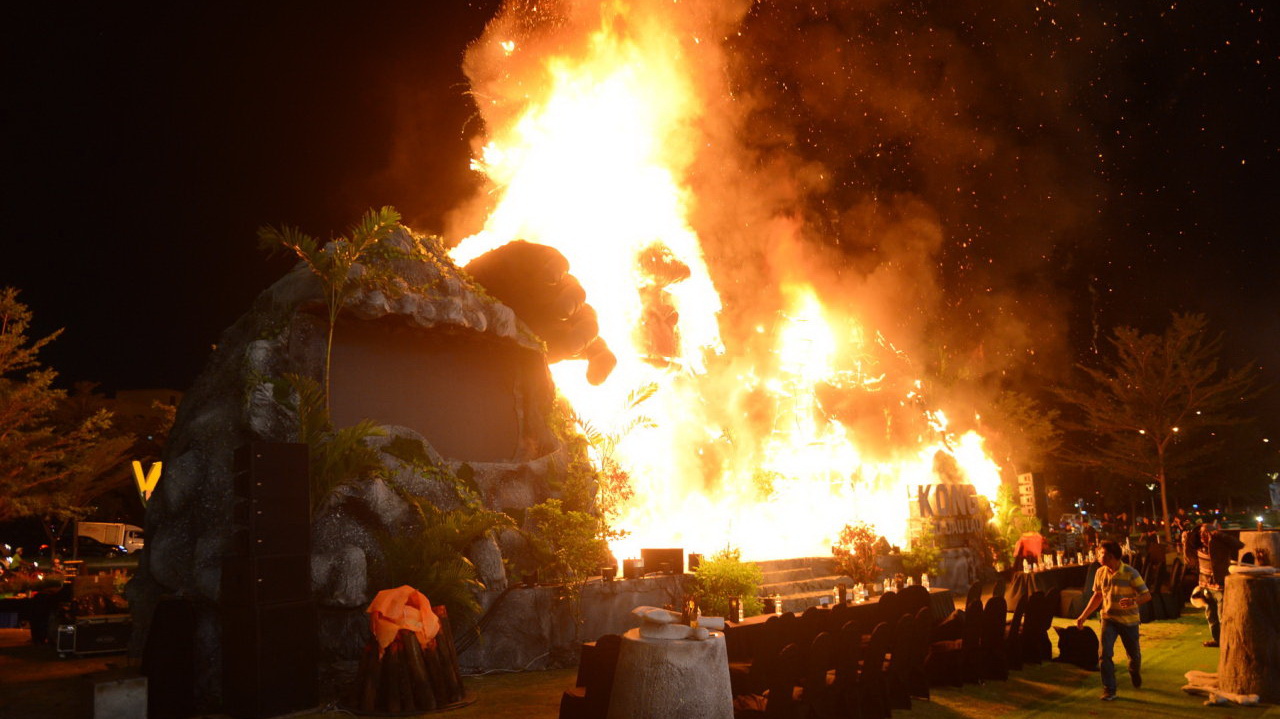 The ceremony was held in front of the SC Vivo City shopping mall in District 7, where government officials, U.S. diplomats, celebrities, and representatives from Warner Bros. Pictures gathered to celebrate the opening of the first Hollywood blockbuster to be shot mainly in Vietnam.

Towering of the ceremony’s stage was a ten-meter tall model of King Kong, the enormous fictional ape-like beast whose name was given to the film’s title.

At around 7:10 pm, when the event’s emcee was delivering a monologue following a lively performance from fire dancers in tribal costume, smoke and flames began to rise from the left hand of the Kong model.

Within seconds the flames sprang out of control and disorder spread amongst the audience, forcing the MC to stop mid-speech.

Within five minutes the entire foam model was consumed by a raging fire and attendees were evacuated from the scene.

Fortunately, the only casualty from the ordeal was the giant Kong model, whose ashes littered the SC Vivo City parking lot, surrounded by its enormous metal frame and damaged stage equipment

According to organizers, the fire started when one of the fire dancers, after retreating backstage, accidentally set hay and foam decorating the stage on fire with his still-burning torch.

Within minutes the flames were out of control, forcing the premiere ceremony to be cut short and guests to be directed into the cinema to enjoy the opening screening of the movie in Vietnam.

According to its producers, up to 70 percent of the runtime of 'Kong: Skull Island' was filmed in the Vietnamese provinces of Quang Binh, Quanh Ninh and Ninh Binh.

The blockbuster will be screened in cinemas nationwide today, March 10, the same date as its world premiere.

The skeleton of the giant model of King Kong after the fire had been put out. Photo: Tuoi Tre