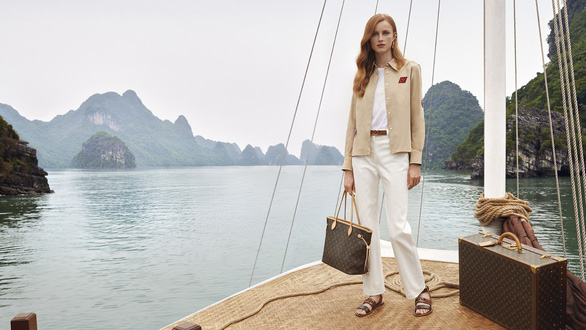 Entitled “Spirit of Travel Campaign,” the promotion is made in the form of a travelogue, comprising multiple images and a 70-second film, to celebrate Louis Vuitton’s values with a journey to Ha Long Bay and Ninh Binh Province in northern Vietnam, and central Hoi An City.

The popular picturesque locations in Vietnam, including in the peaceful Hoi An Ancient Town, the poetic Tam Coc – Bich Dong site in Ninh Binh and the majestic Ha Long Bay in Quang Ninh Province, serve as the backdrop for the advertising film and photos.

Notably, the Vietnam journey-themed footage is the latest advertising film LV has introduced in the last four years.

Fashion creative director David James, photographer Angelo Pennetta, and stylist Fran Burns joined hands to convey a sense of timelessness and a static moment in time through this travelogue, according to LV.

In 2014, the luxury fashion brand also issued a travel guide with illustrations and paintings about Vietnam by famous Italian artist Lorenzo Morretti.

The “Spirit of Travel Campaign” has endured as Louis Vuitton’s most essential and timeless guiding principles since 1854, the company said on its website.

Below are some photos from Louis Vuitton’s campaign.