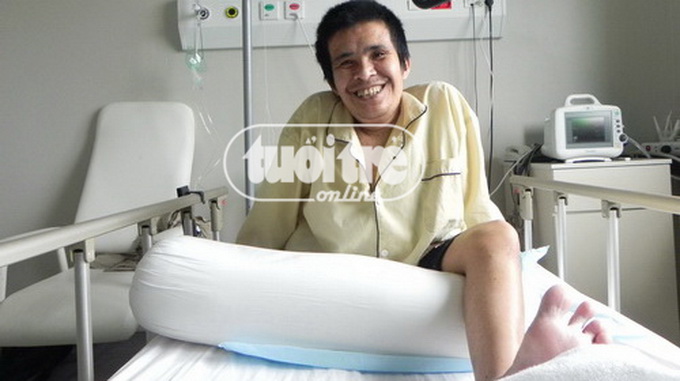 Nguyen Duy Hai, who had his 200lb tumor removed in 2012, died early this morning at Lam Dong general hospital.

Pham Vu Thanh, a doctor at Lam Dong hospital, confirmed with Tuoi Tre that Hai developed difficulty breathing and was in a coma when he was hospitalized at 4pm on Oct. 24.

Thanh added that hospital staff put Hai on a ventilator and gave him emergency medical care but failed to save his life.

His family said Hai suffered acute pain from the tumor incision before his death.

Dr. Jean-Marcel Guillon, Chief Executive Officer of FV hospital where Hai was operated on last year, responded by email that the hospital has assigned a team to attend go over Hai's residential home in Da Lat central highlands city for the funeral service.

The team will also work with their counterparts from Hoan My Da Lat hospital and Lam Dong hospital to find out the cause of his death.  "At the moment, we are trying to understand. It seems that it happened very suddenly, but we don’t know yet for sure" - Dr. Guillon said.