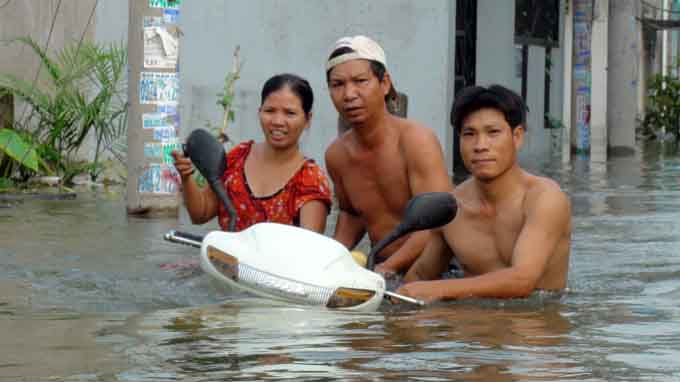 River to rise quickly on first days of 2014, causing flooding

Many areas in Ho Chi Minh City may be flooded from the first day of the new year, when the water level of the Saigon River will reach 1.5 meters--alarm level 3--and continue to rise, the Southern Hydro-meteorological Station has warned.

>> HCM City suffers flooding caused by high river water>> Floods at record high in Ho Chi Minh City According to the station’s forecast, the tide will begin to rise at 2 am January 1, 2014 and will reach alarm level 3 by 3 am. It will then recede gradually before going down to 1.47 meters at 5 pm the same day. On Wednesday, January 2, the river water will rise again to reach 1.54 meters at 4 am before receding to 1.47 meters at 6 pm that day. A day later, the tide will rise again and peak at 1.57 meters at 5 am. It will go down slightly to 1.51 meters at 6:30 pm the same day. According to the station, the river is rising fast due to the impact of seasonal northeast winds. Rising water levels will inundate many low-lying areas in different districts including District 6 and 8 and Binh Chanh and Nha Be Districts.