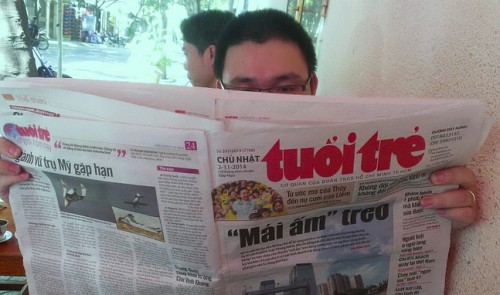 -- Vietnam’s Party General Secretary Nguyen Phu Trong hailed the contributions of U.S. Secretary of State John Kerry as he received him in Hanoi on Friday. The top U.S. diplomat said his visit is one of the activities marking the 20th anniversary of the bilateral diplomatic ties, as well as part of efforts to implement the agreements reached by both countries.

-- Vietnamese Prime Minister Nguyen Tan Dung and his Malaysian counterpart Najib Rajak agreed to develop the Vietnam-Malaysia relations into a strategic partnership at their talks in Kuala Lumpur on Friday, where they also witnessed the signing of three cooperation agreements.

-- Police in the north-central province of Quang Tri on Friday evening arrested a 24-year-old man, Ho Chi Bao, suspected of killing two people and injuring another while committing a robbery in a house whose owner is the boss of a private company in Huong Hoa District earlier the same day.

-- The death toll in the recent serious flooding caused by prolonged downpours in northern Vietnam has increased to 32 as of Thursday, the Central Committee for Disaster Prevention and Control reported on Friday.

-- Police in the central province of Thua Thien-Hue on Friday night arrested 20-year-old Nguyen Van Nghia, an armed robber who stole a SH scooter from a local man, as he was hiding on the Mu Nhan Mountain.

-- The Ho Chi Minh City People’s Committee has directed authorities of 24 districts to set up teams to collect road maintenance fees from motorbike’s owners under a government decree, and use the fee revenue to repair or upgrade the city’s traffic infrastructure.

-- Police in the south-central province of Phu Yen on Friday said they have arrested two young men, aged 20 and 16, on suspicion of kidnapping a 4-year-old girl in Son Hoa District a day before for a ransom of VND1 billion (US$46,000).

-- Nearly 795 hectares of land managed by the Vietnam People’s Navy in Cam Ranh City, the south-central province of Khanh Hoa, will be handed over to the provincial People’s Committee this month for use in a project to build a tourist and service complex, including a golf course, the provincial authorities said on Friday.

-- A project to build a 7-km long cable car system to transport tourists from An Thoi town to Hon Thom Isle on Phu Quoc Island, a district of the southern province of Kien Giang, is expected to be developed in September this year and completed in 2017, the provincial People’ Committee said on Friday.

-- A golf tournament aimed at raising funds for about 1,000 scholarships for students nationwide is slated to kick off on Saturday at the Long Thanh Golf Course in the southern province of Dong Nai, drawing 148 players. The event is jointly organized by Binh Dien Fertilizer Company, the Vietnam Television Center in Ho Chi Minh City, Long Thanh Golf Company, and Tuoi Tre (Youth) newspaper.