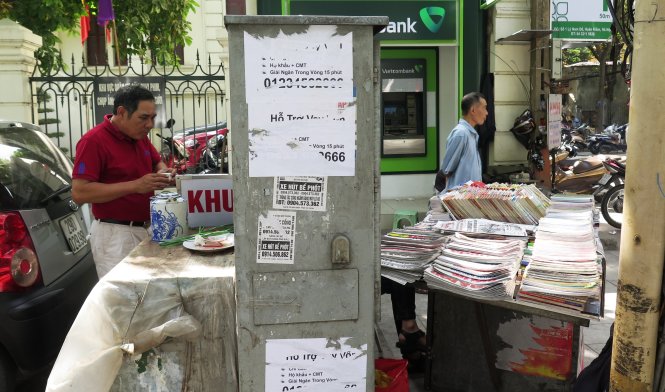 In Vietnam, it is not uncommon to see local people run business such as selling food or goods near power substations installed along the streets, despite a huge risk these sets of equipment pose to their lives.

The power substation explosion outside Hanoi earlier this week may send shock to many people, but those who are earning a livelihood near those substations seem unfazed.

On Thursday, a power substation exploded in Hanoi’s outskirt district of Ha Dong, killing one and injuring four others.

Despite the fatal incident and the fact that the substation is considered 'time bomb,' which can explode at any time, numerous street vendors and locals still continue putting their stalls right next to the electric equipment.

According to Le Anh Duong, director of the power company in charge of Ha Dong District, Hanoi, there are warning signs attached to all the power substations in the capital. However, there is no official information regarding how far the residents need to live away from the equipment.

The equipment used in the power substation exploding on Thursday is an old APP model, according to a preliminary report. The accident is said to be caused by oil leakage.

Police and relevant agencies are currently working on the case to better understand the cause and to have preventive solutions for similar future mishap.

Hanoi residents also hope that the government and particularly the municipal power company will install the power substations and other potentially dangerous electric equipment in more secure places, far from crowded residential areas.

Tuoi Tre (Youth) newspaper took a tour around many streets in Hanoi, including Hang Cot, Luong Ngoc Quyen, and Phan Dinh Phung, on Friday and captured these photos.

A woman washes dish right beneath a power substation

Selling stuff behind the 'time bomb'