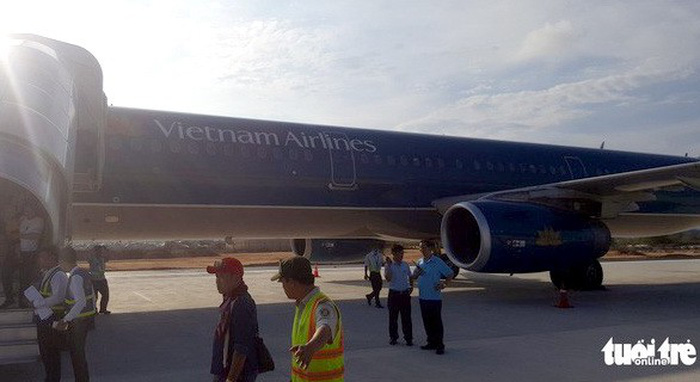 Investigators from the Civil Aviation Administration (CAA) of Vietnam have found that pilots were mostly to blame in a headline-grabbing aviation scandal, when a Vietnam Airlines plane landed on an under-construction runway at a south-central airport on Sunday.

Flight VN-7344, which departed from Ho Chi Minh City at 2:00 pm on Sunday carrying a seven-member crew and 203 passengers, touched down on runway No. 20 at Cam Ranh Airport in Khanh Hoa Province at 2:53 pm the same day.

The runway is under construction and has not been put to use.

Passengers who disembarked from the plane an hour later noticed they had pulled to a stop just 300 meters from a fence, and construction materials were scattered on the runway and inside the engines of the Airbus aircraft.

As the plane could not access taxiways, passengers had to be ferried by airport buses to their terminal.

No passenger or crew member was hurt in the wrong-runway landing.

A video capturing the landing of a Vietnam Airlines flight on an under-construction runway at Cam Ranh Airport in Khanh Hoa Province in south-central Vietnam on April 29, 2018. Clip: Tuoi Tre

The flight was captained by American pilot Andre Thomes Cuevas, 53, who had only recently been promoted by Vietnam Airlines to the rank of captain and had “limited” flying hours under his new title.

The first officer, a 27-year-old Vietnamese pilot, was in direct control of the plane during landing while his captain kept a watch over the maneuver, according to CAA.

Both pilots, the crew and air traffic controllers responsible for landing the flight have been suspended from work for investigation.

According to CAA investigators, weather conditions were ideal during flight VN-7344’s landing on Sunday, and communications systems at the airport were fully operational.

Examination of the plane’s cockpit voice recorder and flight data recorder found that the pilots were largely at fault in mistakenly landing on the wrong runway despite accurate guidance from ground controllers.

They had failed to recognize they were headed for the wrong runway despite maintaining communication with each other and with air traffic controllers throughout the landing process, CAA investigators found.

The lack of markings on runway No. 20 to indicate that it was under construction also played a part in the incident, though CAA stressed such markings are only required for runways that are closed permanently or for a long period of time.

Nevertheless, the aviation watchdog has requested immediate installation of markings and other visible signs on the runway to prevent future mishaps.

Duong Tri Thanh, general director of flag carrier Vietnam Airlines, has asserted that all of the airline’s pilots are qualified as per international standards on health status and flying hours.

Thanh said the airline had worked closely with authorities during the investigation and would comply with any demand for disciplinary actions against its crew.