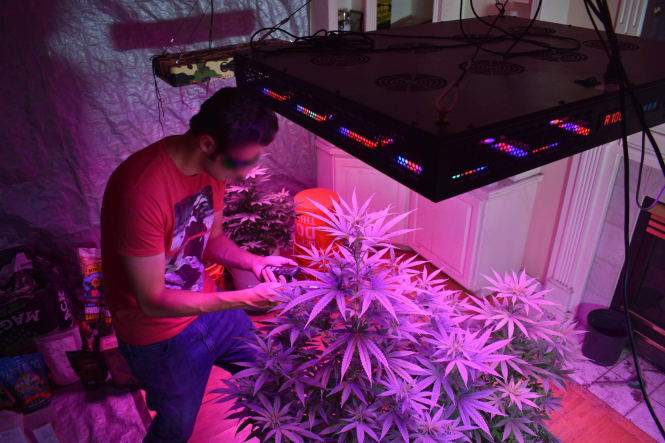 Some recreational cannabis users in Vietnam’s biggest cities have taken up growing their own weed indoors to cut costs associated with the outlawed hobby.

It was past midnight when Bui Ta Tu, a cannabis seeds dealer from the northern province of Bac Ninh, phoned his ‘clients’ announcing the arrival of a new shipment.

“For this type of fast-growing seed, there’s only a two-month wait between sowing and reaping,” Tu assured his buyers.

Cannabis, also known as marijuana, ‘pot’ or ‘weed’ among other names, is a psychoactive drug that can create a general change in perception, heightened mood, and an increase in appetite in users, according to the U.S. National Institute on Drug Abuse.

The drug can be used by smoking, vaporizing, within food, or as an extract, either for medical or recreational purposes.

Despite the production of cannabis being illegal in Vietnam, punishable by up to life imprisonment or death, many pot smokers in the country are risking their lives growing the banned drug inside their own homes.

Tu has become a household name among indoor marijuana growers in the northern provinces of Vietnam, being a major importer of cannabis seeds to supply to Hanoi, Hai Phong and Quang Ninh markets.

Not only does Tu sell cannabis seeds, he also grows a little ‘weed farm’ of his own and sells the fully-grown drugs to buyers.

In Ho Chi Minh City, the go-to man for first-timers is Le Thanh Dat, who is known for providing useful tips on looking after indoor weed farms and finding outlets for one’s harvest.

Those with more money to spend should invest on a fabric closet similar to a ‘greenhouse,' in which they can grow cannabis safely without worrying about police detection, Dat advised.

“Better safe than sorry, as what you’re doing is basically produce narcotics,” he said.

On Facebook, many private and public groups have been created as a platform for marijuana growers to connect with buyers.

“Nobody gets involved in these things and manages to remain not addicted,” Trung said.

According to Chu Thi Hoa, head of drug investigation under Hanoi’s Hoan Kiem District Police, marijuana users tend to ‘upgrade’ to narcotics and ecstasy once they feel cannabis is no longer enough to satisfy their needs.

“Word should be spread on the terrible effects and consequences of this psychoactive drug on users,” Hoa said, adding that cannabis usage among Vietnamese youth has been on the rise recently.

“School students and undergraduates are most susceptible to the attraction of recreational drugs,” she added.