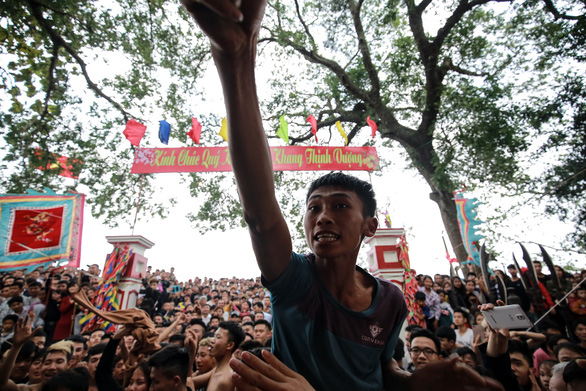 Residents of a locality in the northern Vietnamese province of Phu Tho expressed their fierce opposition on Sunday to a decision by local authorities to cancel the notoriously brutal ‘lucky ball’ competition, their favorite part of the province’s traditional springtime festival.

On this day, following necessary rituals at the Thieu Hoa Temple in Hien Quan Commune of Tam Nong District, the main part of the festival begins, where young men from local villages would scramble for the ‘phet,’ or ‘lucky balls.’

According to the tradition, individuals who manage to steal one of the balls will be blessed with fortune for the whole year.

This year, the Hien Quan administration decided to organize the festival on the weekend, or the 12th and 13th day of the 2019 lunar year, with three ‘phet’ set to be put up for competition on each day.

In order to minimize violence, the administration chose 100 young men and divided them into two teams, which were supposed to compete for the lucky balls.

Multiple layers of fences were also built around the field where the competition took place to prevent it from being interfered in by other local men, who were not part of the two teams.

Despite these preparations, the event did not go according to the plan. On the first day of competition, the crowd still managed to climb over the fences to enter the field, where they attempted to snatch the ‘phet.’

The Phu Tho Department of Culture, Sports and Tourism later asked the Hien Quan administration to cancel the ‘phet’ competition on Sunday and stop organizing any ‘luck ball’ fights in the future.

Other rituals associated with the Phet Hien Quan festival are still allowed to take place.

Upon learning that their favorite competition was banned from taking place for good, local residents, mostly young men, stirred up disorder at the festival venue on Sunday afternoon, demanding that the event be carried out to ‘preserve traditions.’

As of 5:00 pm on Sunday, many people still gathered in front of the Thieu Hoa Temple to express their objection, while some even tried to interfere with the rituals and steal the ‘phet.’

A lot of officers were mobilized to guard the gate and stop the situation from spiraling out of control.

“We are really upset as the ‘phet’ competition was removed from the festival,” Pham Thi Nam, a local resident stated.

“It has been an important part of our tradition for generations.”

“Authorities should take suitable measures so that the event will be able to take place next year, instead of canceling it for good,” Nam added.

While this part of the fest is most enjoyed and looked forward to by the locals, it has sparked controversy over the past years due to its violent and brutal nature.

It is not uncommon to see hundreds of men shoving one another, swearing and even climbing on top of one another in a desperate attempt to get their hands on the lucky object.

Many end up exhausted without being able to catch the ‘phet,’ while confrontations can sometimes break out between the competitors.