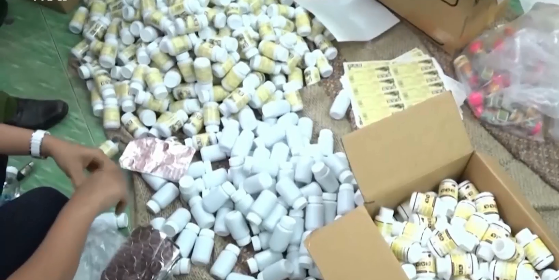 Police offices have initiated legal proceedings against nine of the suspects being held in custody, including Thu and Khoi, officers said on Monday.

Preliminary information showed that Thu organized the production of fake medicines at a facility on Hoa Binh Street in District 11.

Her products were mainly bogus liver and bile tonic bearing the names of famous brands.

Meanwhile, Khoi and his gang focused on counterfeiting many types of dietary supplements, hair loss medicines, and enhancement pills for both men and women.

Thu and Khoi joined hands to ensure a stable source of input materials for their illicit production.

The counterfeit drugs were distributed to private drug stores and pharmaceutical centers in Ho Chi Minh City and provinces in the Mekong Delta.

Thu and Khoi managed to keep their operation under the radar thanks to their advantage as leaders of drug firms.

They then raided a total of seven locations in District 8, District 10, District 11, Tan Phu District, Binh Tan District, and Binh Chanh District, and confiscated more than 500 cardboard boxes containing counterfeit medicine and dietary supplements, along with hundreds of kilograms of material.

The seized products are collectively worth several billion dong (VND1 billion = US$43,000), according to officers.

The investigation was still ongoing as of Tuesday.