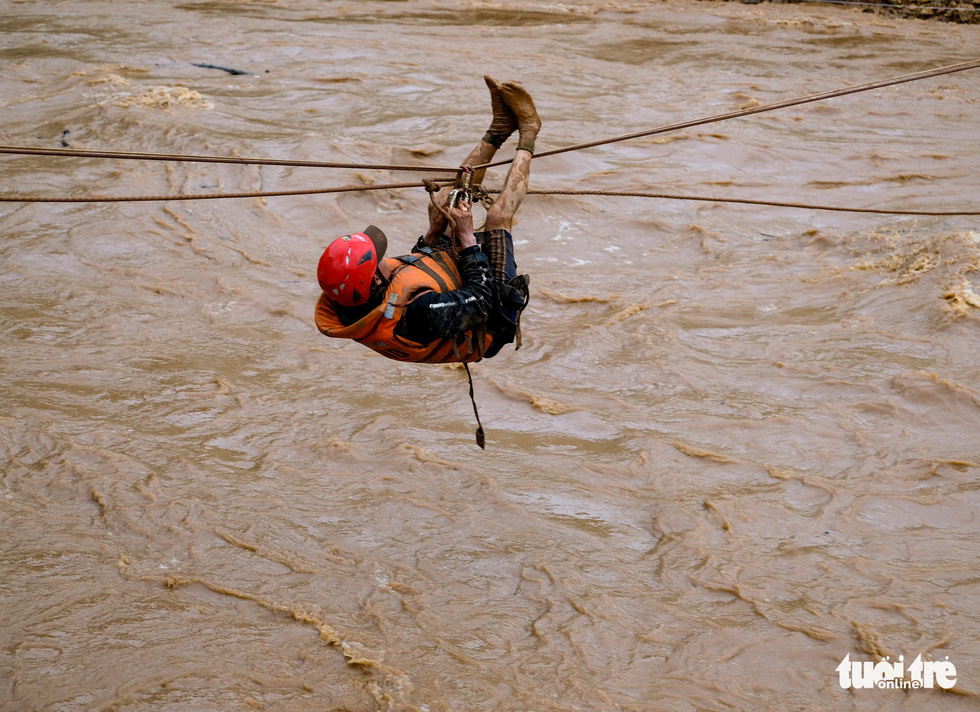 Many localities across Vietnam’s Central Highlands have been submerged and isolated after continuous rains unleashed flooding over the past days, prompting local authorities to take all measures possible to ensure safety for the affected residents.

As the bridge leading to the area was submerged under fast-flowing floodwater, rescue units were forced to use zip lines to bring the victims to safety.

According to Doan Manh Toan, deputy head of the provincial department of firefighting police, using the zip line was the most viable option as the water flow was too strong for rescuers to operate a speedboat.

“We had to do it carefully and quickly because we worried the flooding might worsen given the bad weather conditions,” Toan stated.

According to the victims, heavy rain started on Wednesday night, but few expected such serious flooding.

The flashflood occurred at around 5:00 am on Thursday, sweeping away several farms in its path and catching local residents completely off guard.

Many other locations throughout Lam Dong Province have also experienced several floods, resulting in a loss of over 2,000 hectares of crops.

At around 1:00 am on Friday, rockslides hit six locations along the Bao Loc Pass, a major route connecting Ho Chi Minh City and the tourist city of Da Lat.

Meanwhile, two communes in Eu Sup District, Dak Lak Province have yet to experience any relief, thanks to heavy rains on Thursday.

Competent authorities have been exerting their best efforts to evacuate residents and their assets from dangerous areas, said Nguyen Dinh Toan, vice-chairman of the People’s Committee in Ea Sup.

In Dak Nong Province, a married couple and their three-year-old daughter were killed by a landslide on Wednesday night.

It took local authorities ten hours to dig out the bodies.

Statistics from the provincial steering committee for disaster prevention showed that about 1,000 hectares of crops have been inundated, while hundreds of houses are flooded and damaged due to the heavy rains over the past days.