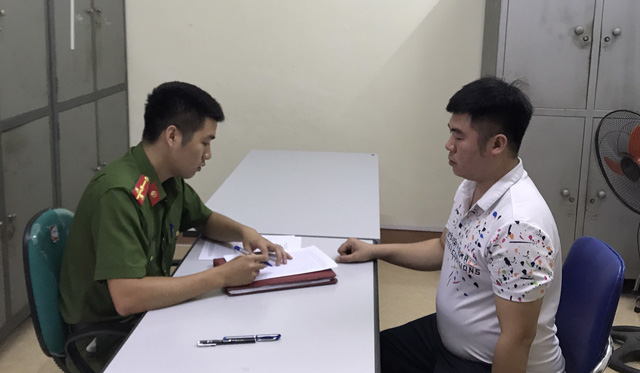 A man from the northern Vietnamese province of Lao Cai who was caught on CCTV hitting a little girl at a kindergarten turned up at the police station after being summoned by officers several times.

Police in Lao Cai City, which is the capital of the namesake province, confirmed on Sunday that Bui Van Hung, 32, had arrived at the police station for a working session.

Hung claimed he went to Trumpkids Kindergarten at around 4:00 pm on September 30 to pick up his daughter – C.T..

He rushed into the classroom after hearing his daughter crying. He then saw a red bite mark on her arm.

“I am nearsighted so I thought that my child was bleeding," Hung recounted.

"I gently slapped on the face of B.A. [who had had a fight with T. over a toy] and told her to apologize."

A. started crying but did not say sorry, so the man grabbed her by the hair and continued slapping her, hitting her leg and buttocks until she apologized to his daughter.

Following the incident, Hung took T. home before driving his car to Hanoi to visit a sick relative later the same day.

After seeing news about his violent actions on social media and news outlets, Hung contacted A.’s father via texts and phone calls.

He also asked a family member to apologize to A.’s family directly.

However, A.’s father previously said he did not accept the apology and would ask police officers to deal with the case.

Police had summoned Hung twice but he did not show up until Sunday.

Officers are collecting further statements of relevant individuals and waiting for the results of the victim’s injury evaluation.

Doctors save newborn with organs outside of belly in Vietnam