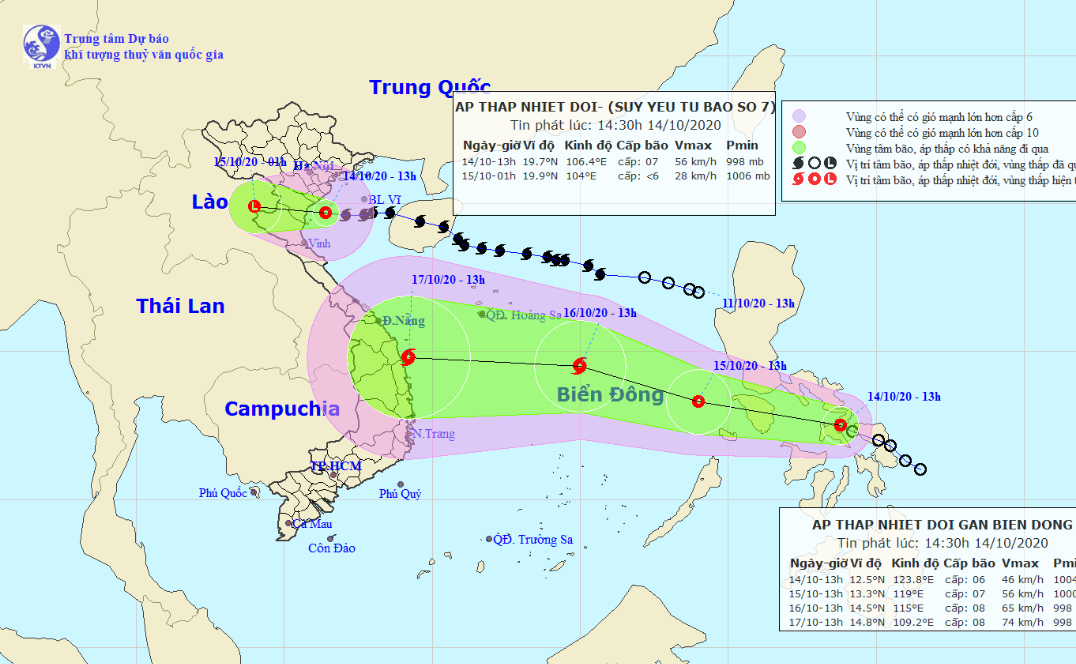 As of 1:00 pm, average wind speed was at 50-60km per hour and gusts at up to 90km an hour, according to the National Center for Hydro-meteorological Forecasting.

In the next 12 hours, the low-pressure system will make landfall between Thai Binh and north-central Nghe An Province, with winds at below 40km per hour.

Due to the storm circulation and a cold front, downpours at 150-250 millimeters are forecast to batter localities in the Red River Delta, along the coast in northern Vietnam, as well as Thanh Hoa and Nghe An Provinces from October 14 to 16.

In north-central Ha Tinh Province and other localities in the northern region, rainfall will be at 50-100 millimeters during this period.

A fresh tropical depression formed on Wednesday and was located in the central part of the Philippines at 1:00 pm, packing winds at 40-50km per hour.

It is expected to travel northwest in the next 24 hours, pick up strength, and enter the East Vietnam Sea.

By 1:00 pm on Thursday, it will be at 550 kilometers northeast of Song Tu Tay Island in Vietnam's Truong Sa (Spratly) archipelago,

The tropical depression will keep heading northwest in the next 24 to 48 hours and possibly evolve into a storm.

By Friday afternoon, the storm will be at 330 kilometers north of Song Tu Tay Island, with winds increasing to between 60 and 75km per hour, and gusts at up to 100km an hour.

According to the southern hydro-meteorological station, southern Vietnam is affected by the southern end of Storm Nangka’s circulation, thus medium to heavy rain is in the forecast in the next few days.

Rain in the region tends to decrease in intensity in the morning.