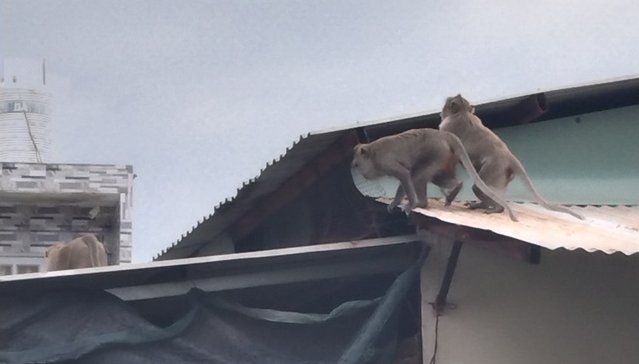 A troop of monkeys has been causing trouble in a neighborhood in Ho Chi Minh City, and local authorities have yet to come up with a proper way to deal with the issue.

The situation has been taking place in a neighborhood in Thanh Xuan Ward, District 12.

According to the observation of Tuoi Tre (Youth) newspaper reporters on Tuesday, multiple monkeys were seen on the roofs, fences, electric wires, and trees within the residential area.

The monkeys have long tails, with the fully grown ones weighing about 15 kilograms.

Residents said that several monkeys raised by a local household had escaped about 10 years ago.

The primates then inhabited an area on a nearby riverbank with dense vegetation, and the troop eventually grew bigger.

Their habitat was recently narrowed down after many trees in the area were chopped down, forcing the monkeys to head back to the residential area to find food.

The troop has about 15 to 16 monkeys, Le Thi My Lien, a 56-year-old resident, said, adding that they often come in groups of five or six and eat fruits from trees grown by locals.

The primates sometimes sneak into Lien’s grocery store and steal snacks. They also make loud noises as they jump on the roofs.

“A monkey once attacked a dog and bit the dog’s ear. Many people are worried that the monkeys may also harm their children,” Lien stated.

Trinh Thi Ngan, 62, said she had set up a trap on her house roof but has been unable to catch any monkeys so far.

“Other residents are also trying to capture these monkeys so that they no longer vandalize our neighborhood,” Ngan elaborated.

Nguyen Xuan Dat, chairman of the People’s Committee in Thanh Xuan Ward, told Tuoi Tre that the administration had received reports from local residents and is seeking assistance from the municipal forest protection department to deal with the situation.

According to a representative of the city’s forest protection department, the troop of monkeys has the characteristics of the macaque species, which is listed in Appendix 2 of the Convention on International Trade in Endangered Species of Wild Fauna and Flora (CITES).

Residents should not handle the animals themselves and should instead contact competent authorities, he added.