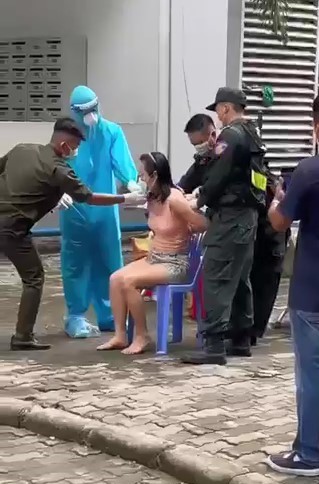 A team of officers was filmed breaking the lock of an apartment and forcing a woman to undergo COVID-19 test sampling in the southern Vietnamese province of Binh Duong on Tuesday.

The incident took place at Ehome 4 Apartment Complex in Vinh Phu Ward, Thuan An City at around 10:30 am on Tuesday, according to a probe by Tuoi Tre (Youth) newspaper.

The woman in question is H.T.P.L., who resides in Block B of the apartment building.

Several video clips of the incident were uploaded to social media, one of which was recorded by L. herself.

L. said she was teaching an online yoga class when someone knocked on her door and requested her to have her nasal swab taken in public.

The woman then refused, explaining that she had already conducted a COVID-19 test by herself.

L. added she did not want to come into contact with others, and she was in the middle of her class.

A group of people including representatives of the ward authorities, police officers, and members of the apartment complex’s management board later forcefully opened the door of L.’s apartment and took her to the yard for the nasal swab collection.

A representative of Vinh Phu Ward’s steering committee for COVID-19 prevention and control confirmed the authenticity of the video clips, adding that the ward Party chief was also present at the time.

The representative said they had to use force because the woman was not cooperating.

She had refused to be sampled multiple times before, he continued, adding that the woman’s apartment is located on the ground floor and thus at very high risk, as infections were once detected in her block.

"We don’t want to do this to anyone, but it requires assertive measures to effectively contain the pandemic,” he stated.

“Sampling only takes a few minutes if local residents agree to cooperate.”

After the videos went viral, Thuan An City’s steering committee for COVID-19 prevention and control has required relevant agencies to make a report of the case.

Whether or not the use of force violated the law is also being clarified.

Police in Vinh Phu Ward have booked L. for violating pandemic response regulations and will summon her to their station for a working session.