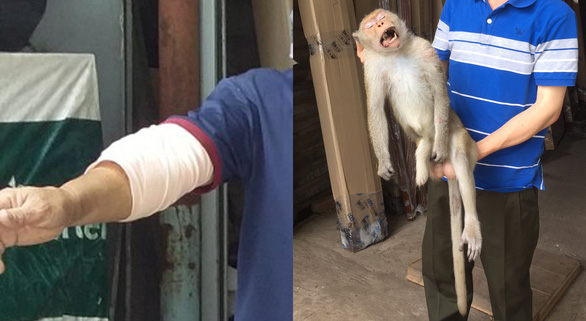 The rangers lured the monkey with fruit and used a specialized gun to anesthetize it on Saturday morning.

The monkey has been sent to the Cu Chi Wildlife Rescue Station in the namesake district for further care in accordance with regulations.

A male primate jumped from a tree and bit Tuan’s pants, causing slight scratches to his skin, before disappearing on November 10, he recounted.

The monkey reappeared on the next afternoon and bit Th., a worker at Tuan’s workshop, leaving deep wounds in his arms and leading to him bleeding profusely.

The wild animal once again ran away as Tuan appeared to check on Th., who was then given first aid and had his wounds bandaged.

Another person also fell victim to the monkey at a recreational fishing establishment next to the wood workshop on November 12, according to Tuan.

The monkey is a long-tailed macaque with long fangs, weighing about seven kilograms, with an amputated right foot, according to an official from the Ho Chi Minh City forest protection bureau.

“According to our observations, this male monkey is estimated to be about ten years old,” the official said.

“It is not clear why the animal has an amputated foot.”