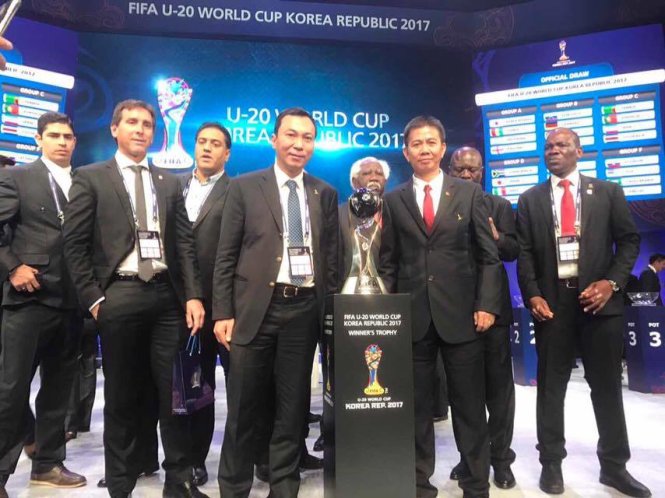 Vietnam will start their first-ever FIFA U-20 World Cup journey in South Korea against France, Honduras and New Zealand.

The draw ceremony was held on Wednesday at the Suwon Artrium in Suwon, South Korea, with Diego Maradona and Pablo Aimar, two Argentine players who have won the U-20 World Cup, participating in the process.

Twenty-four teams were drawn into six groups, with the host country in Group A by default.

Vietnam, to play the first FIFA World Cup in the country’s football history, were drawn into Group E with France, Honduras and New Zealand.

Serbia, the 2015 champions, will not be able to defend their title as they failed to reach the final round of the UEFA qualifying tournament.

The South Korea tournament, the 21st edition of the FIFA U-20 World Cup, will run from May 20 and June 11, with the top two teams of each group and the four best third-placed teams advancing to the round of 16.

Vietnam’s coach Hoang Anh Tuan is confident his players can grab the opportunity to advance as one of the best third-placed teams.

Vietnam booked the historic World Cup ticket to South Korea by finishing as one of the top four teams at the AFC U-19 Championship, the Asian Football Confederation’s qualifier for the World Cup, in Bahrain in October 2016.

At the AFC tournament, Vietnam beat North Korea 1-0 in their group stage opener, tying with both the UAE and Iraq, 1-1 and 0-0 respectively, before defeating Bahrain 1-0 in the quarterfinal.

The other three Asian teams securing a World Cup berth after the Bahrain tournament are Iran, Japan, and Saudi Arabia.