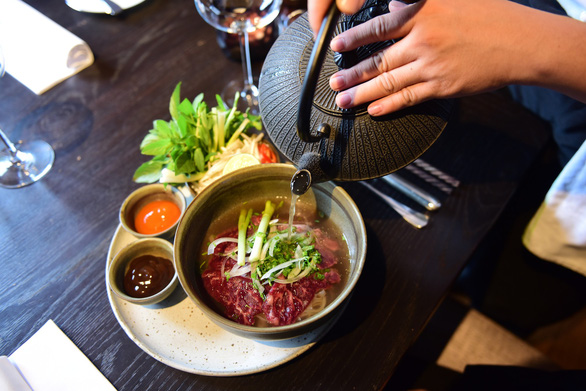 A US$50 bowl of pho with Wagyu beef, one of the most expensive pho in Ho Chi Minh City, is making locals and tourists alike ask a simple question: how can noodles be so pricey?

According to Heath Gordon, an Australian chef at Square One Restaurant in District 1’s Park Hyatt Saigon, the luxurious bowl of pho is one of the best-sellers, despite its equally luxurious VND1 million ($43) price tag.

And who exactly was the dish designed for? Well, according to Gordon, everyone.

The current ratio of Vietnamese to foreign customers who order his Wagyu beef pho is fifty-fifty, he said.

For the most part, Gordon’s pho has all the makings of the traditional dish - broth, rice noodles, fresh herbs, and beef.

The Australian chef, however, throws a twist into the dish with the addition of Wagyu beef, produced from Japanese Wagyu cattle prized for its fine texture and unique flavor.

“Many people question the difference between Wagyu beef and other types of beef, but that question is answered the moment they put the Wagyu meat into their mouths,” Gordon said confidently.

Each bowl of this pho contains 90 grams of Wagyu beef and is served to diners directly by the chef.

The broth is prepared in a special metal pot which is able to retain heat for extended periods of time and is only poured over the noodles right before the customer is ready to eat.

According to Gordon, this sort of elevation to Vietnam’s traditional dish is one of the ways to enhance its value and popularity on the global level.

In the same spirit, a vote-based competition organized by Tuoi Tre (Youth) newspaper to choose the top ten most beloved pho restaurants in Vietnam is taking place in order to help increase the dishe's popularity.

The competition serves as a lead-up to the 2019 Day of Pho, the third edition of the Tuoi Tre-hosted annual event honoring Vietnam’s most famous dish.

The first ‘Pho Day’ was held in 2017 as part of an initiative launched by Tuoi Tre to celebrate the country’s national dish.

A year later, December 12 was officially designated as Vietnam’s 'Day of Pho.'

The third Day of Pho will be held on December 8, 2019 at the White Palace wedding and convention center on Pham Van Dong Street in Thu Duc District, Ho Chi Minh City, with support from Acecook Vietnam.