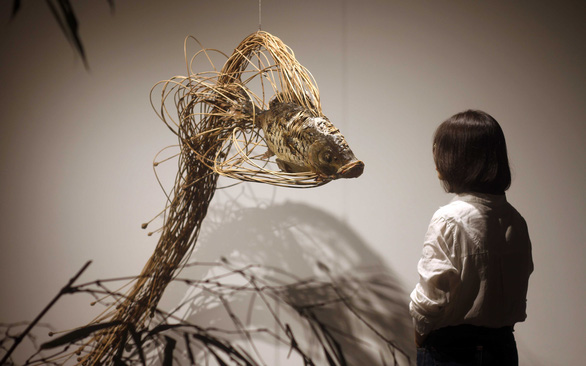 Working with local materials such as rattan and bamboo, Quang Nam Province-born artist Trung Nghia weaves stories of pastoral nostalgia in the age of industrialization in a series of ten contemporary artworks currently on exhibition in Ho Chi Minh City.

For this particular project, Nghia enlisted help from four of the last remaining bamboo-rattan craftsmen in Nong Son Trade Village, Quang Nam Province, one of whom passed away from old age before the exhibition premiered.

With 'Nat Gio Con Bo Tre,' Nghia not only seeks to illustrate the idyllic landscape of the Vietnamese countryside, but also the reflection on the incremental changes taking place in his hometown.

One of the most visually captivating pieces in the exhibition depicts a gutted fish covered by a stream of flora, an interpretation of the harmonization between life and death in nature.

Other impressive works featured in the exhibition include a six-meter boat crafted from rattan and a meadow made from bamboo, which shone a new light on ways people incorporate typical items into their daily lives.

While Heizer alludes to an abstract sense of weight and reality, Nghia’s art hints at the all-too-real threat of landslides in central Vietnam.

The boulder, hence, represents the constant threat that hangs over the heads of locals.

Nghia used to be known for the explicit messaging in his depictions of wild animals drawn using gunpowder and smoke.

This exhibition, however, marks his advance into new grounds in terms of expression.

The collection prompts burning questions on the state of the natural environment, where the old collectivism, nature-friendly lifestyle is gradually being superseded by monoculture and excessive pollution.

Though the event is completely free, copies of Art Republik Vietnam Magazine #1 will be sold on-site to benefit the rebuilding of restrooms and purchase of school supplies for children in the remote areas of Quang Nam Province.