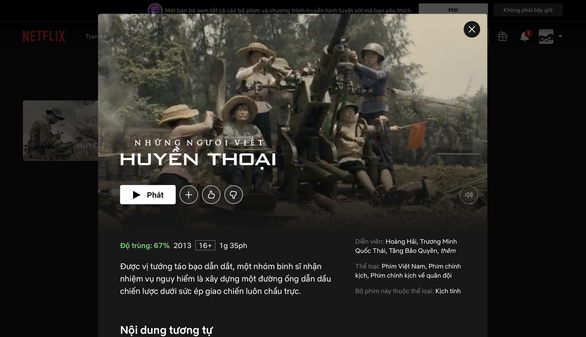 The streaming giant Netflix has issued an official announcement following the probe of the Vietnam Cinema Department into the distribution license of two state-funded films on the platform.

Earlier, Tuoi Tre (Youth) newspaper reported on the questionable release of 'Vu Dieu Tu Than' (The Dance of Death) and 'Nhung Nguoi Viet Huyen Thoai' (The Legend Makers) on Netflix, as the Vietnam Cinema Department, the intellectual property (IP) holder, claimed it had yet to grant the distribution to the foreign streaming site.

The department has also requested the Ministry of Culture, Sports, and Tourism, their administrative agency, to investigate Netflix’s license for these movies.

Following the report, a representative of Netflix made an official statement addressing the issue, which specified TFilm Studio as their license provider for the movies in question.

TFilm Studio also granted Netflix the rights to distribute other Vietnamese movies on their streaming repertoire, namely ‘Vu Dieu Dam Me’ (Saigon Yo) and ‘Mui Co Chay’ (The Scent of Burning Grass).

“Netflix is committed to investing in and broadcasting the captivating stories of Vietnam to Vietnamese and global audiences. We have so far enlisted 70 Vietnamese movie titles and the number will be increased in the future,” the Netflix representative stated.

Meanwhile, the IP holder TFilm Studio claimed in a press meeting last Thursday that they had worked with the Vietnam Feature Film Studio (VFS) -- the production studio of the movies -- to solicit the distribution license for the two movie titles on Netflix.

“As suggested by the licenses provided by VFS, we upheld strict obedience to copyright regulations and licensing documents before publishing these movies to Netflix,” a TFilm representative detailed.

According to this representative, the distribution license issued by the Vietnam Cinema Department named VFS as the copyright holder, who have all the rights to distribute 'Vu Dieu Tu Than' and 'Nhung Nguoi Viet Huyen Thoai' on the market.

“For that reason, the licenses we obtained for Netflix through liaising with VFS are legally justified,” TFilm declared.

Nguyen Minh Hai, director of TFilm Studio, suggested that VFS take necessary measures to resolve the issues related to the distribution of the two films on Netflix and uphold the rights granted to TFilm through signed contracts.

The studio has sent a letter to VFS to seek a response on the issues raised by the Ministry of Culture, Sports, and Tourism.

They also pointed out that Bui Tuan Dung may have mistaken his film 'Vu Dieu Tu Than' to Stephane Gauger’s ‘Vu Dieu Dam Me’ as only the latter is currently available on Netflix.