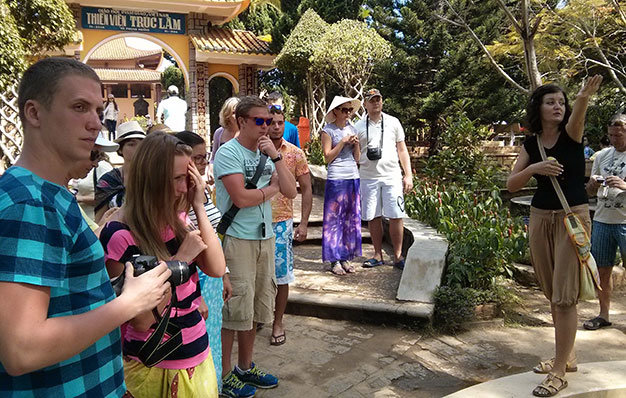 A recent series of reports on Tuoi Tre News that painted a gloomy picture of the Vietnamese tourist industry has captured special attention from foreign readers, who did not hesitate to pinpoint what they thought is behind a sharp fall in international arrivals to the country.

Vietnam suffered the tenth straight monthly plunge in the number of international tourists in March, the latest in a string of worrisome issues hitting the tourist sector that takes great pride in its numerous natural landscapes and heavenly beaches.

The news came as no surprise to local industry insiders, and even to some foreigners, who are working in Vietnam or have visited the country.

“The traffic gets worse, the pollution gets worse, the beaches contain more and more trash everywhere,” commented Christian Krüper on a Facebook page that gathers expats living in Ho Chi Minh City.

“This country could be really wonderful if the mindset from the people would just change a little,” he said, apparently referring to the way tourism authorities handle the drop in the number of foreign tourists.

“There are many scammers in Vietnam who scam tourists,” said Rolan Belarmino Fernandez on the same Facebook page.

Fernandez recalled being tricked by a local man in Pham Ngu Lao, known as the ‘backpacker area’ in Ho Chi Minh City, into buying fake bus tickets to Phnom Penh.

“My friends were also held up in Ho Chi Minh City [and] they lost much money,” he added.

Carlo Campisrn, an Italian backpacker who spent four weeks traveling across Vietnam with his girlfriend, told Tuoi Tre (Youth) newspaper what he saw during the trip was floating rubbish in UNESCO-recognized Ha Long Bay in the north, and a sea of street peddlers annoying him wherever he went.

Falling prey to robbers or thieves is another worry for foreign holidaymakers.

“Tourists are repeatedly told to keep a close watch on their belongings and beware of robbery whenever they set off for a destination in Vietnam,” Phan Xuan Anh, chairman of Du Ngoan Viet Co., wrote in an op-ed sent to Tuoi Tre last month.

“The vacationers are thus afraid that they can be robbed anytime, so how could they enjoy the tours leisurely? And why should they waste money traveling to such unsafe places?”

Scott Duke Harris, an American columnist of Tuoi Tre News, once narrated his experience of being overcharged by two shoeshiners in Hanoi.

Even though tourists are turning their back on Vietnam, the country is weighing applying higher visa fees to foreigners.

“Tourist numbers are down so they increase the visa price to compensate,” Ken Fudge sarcastically commented below a Tuoi Tre News report on the proposed new visa rule.

Fudge blasted that the policy change “only results in even fewer tourists,” and suggested that Vietnam “lower the fees, give more countries visa exemption to attract more tourists.”

“Tourists are initially turned off by having to apply for a visa and again by high visa fees. Vietnam should be making the country more attractive [to] tourists,” he wrote.

For Julien Robellet, who joined the discussion on the Facebook page for expats in Ho Chi Minh City, also thought visa is an issue because it is “too expensive and complicated.”

But he was more concerned about the money matter.

“Waiting for an hour to get a visa on arrival costs you so much on your budget,” he said, adding “flights and hotels are too expensive, as well.”

Robellet said tourists, especially those from the Euro zone, now need a bigger budget for their Vietnam trips due to the weakening of many currencies against the U.S. dollar, whereas the USD-VND exchange rate remains quite stable.

Vietnam began receiving fewer Russian tourists in December last year, thanks to the sharp decline of the Russian ruble.

Kris Goetghebeur, who introduced himself as having been a travel agent in Vietnam since 1999, believed the main reason for a low percentage of tourists returning to the country is “not the visa issue or the quality of service.”

Goetghebeur said the beach is, after all, the only reason why people go back to a country but they would not return to Vietnam’s beautiful beaches because of the exorbitant hotel prices there.

“The difference between Vietnam and other beach destinations in the region are the hotel prices,” he argued. “For a four-star resort in Vietnam, you get a five-star [one] in Thailand.”

The travel agent added that it is also cheaper for tourists to fly to Thailand instead of Vietnam.

Still, there are optimists who think Vietnamese tourism policies are not to blame.

“The drop in tourism is not a fault of policy since the policy itself is pretty robust, at least on paper,” commented Jd Dalisay, arguing that it is simple because “tourists going elsewhere, such as Japan and Thailand.

“The yen and most Asian currencies are cheaper and bring much better value whereas the Vietnamese dong has stayed stable against the U.S. dollar,” he explained.

For Rolan Belarmino Fernandez, Vietnam has more than just such dark aspects.

“I agree everything is expensive in that place and many scammers… but some other locals are very nice,” he said.

Have you ever been disappointed by your trip to Vietnam? Do you have any bad experience with the country’s tourism, or suggestion to improve it? Share your stories with us in the comment box below or email them to ttn@tuoitre.com.vn.