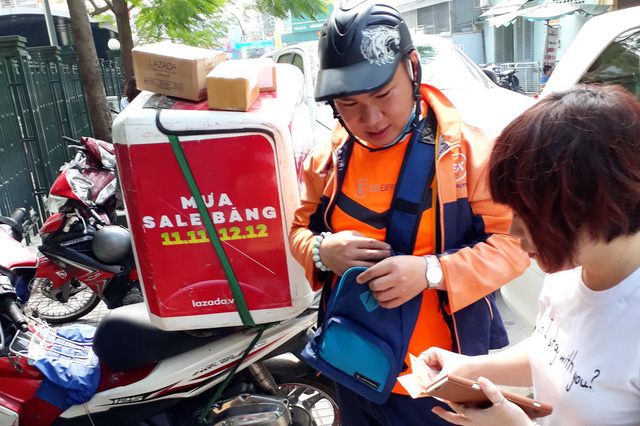 With only a few days off before Tet to make preparations for the country’s biggest holiday of the year, busy office workers in Vietnam have opted for online shopping to avoid the crowds while still being able to choose from a wide range of options.

Tet, or Lunar New Year, falls on February 16 this year, but preparations for the public holiday typically start at least a week earlier.

Similar to Christmas in some Western countries, Tet is a peak selling season for retailers in countries that observe the Lunar New Year, including Vietnam.

Among the most popular items during this shopping season are flowers, clothes, and most importantly food to get one through the week-long public holiday, during which most stores and markets in the country are closed.

This year, online stores have taken the initiative to offer homemade, ready-to-eat food that can be delivered to customers’ doorsteps, sparing them the need to busy themselves preparing food for the long break.

Traditional dishes that are popular on Vietnamese tables during Tet such as boiled chicken, sticky rice cakes and pickled vegetables are best-sellers on online kitchens advertising themselves to be selling only homemade, toxin-free food.

Thuong, owner of an online store offering specialties from northern Vietnam, said she had only set out to sell cooking ingredients when she first opened her store.

“But then some of my customers began to ask me for cooking recipes and whether I could help process the food, so I decided that I would begin to sell cooked food this year as well,” Thuong said.

Nguyen, a ‘clean’ fruits and vegetables online vendor in Ho Chi Minh City, said her customers were mostly migrant workers who wanted to ship items to their hometown early, as they still had to go to work until two days before Tet.

Meanwhile, online store owners said they had started to avoid selling their products via supermarkets in recent years due to the cumbersome paperwork involved and the risk of producing more than the demand.

On customers’ part, buying ‘homemade’ food gives them the confidence of consuming healthy and clean products, amidst growing public fear of dirty food in Vietnam.

“Customers prefer buying from us even at a slightly higher price because they believe that what we sell are homegrown, chemical-free and more nutritious,” Nguyen said.