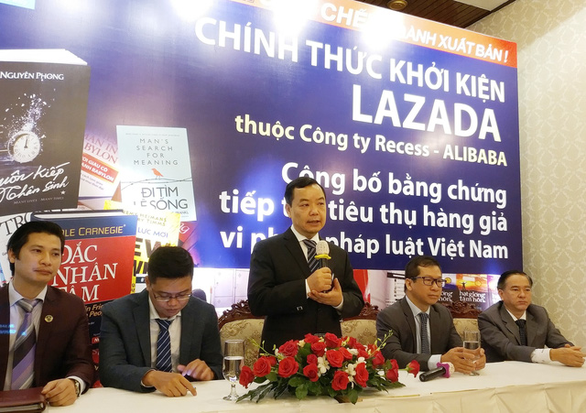 First News announced the lawsuit, which it had submitted to the People’s Court of District 1 in Ho Chi Minh City on September 4, at a press conference on Wednesday morning.

According to the publishing house, many 'fake versions' of its books with poor quality and errors have been sold on Lazada since the beginning of 2019.

Among the pirated books are some of First News’ best-selling titles such as ‘Dac Nhan Tam’ (How to Win Friends and Influence People), ‘Hanh trinh ve phuong Dong’ (Life and Teaching of the Masters of the Far East), ‘Hat giong tam hon’ (Chicken Soup for the Soul), and ‘Muon kiep nhan sinh’ (Many Lives Many Times).

The publisher said the damage caused by the counterfeit products — which are sold for up to 50 percent cheaper than their authentic counterparts — to its sales is too enormous for it to calculate.

First News added the company had repeatedly sent official letters to Lazada and organized public events to ask the e-commerce firm to review and handle the sale of fake books on its platform, but the situation has not been remedied.

“We consider the book business as spreading knowledge, so when [the copyright of] genuine books is violated, we will fight to the end, regardless of who [the violators] are,” First News CEO Nguyen Van Phuoc said at Wednesday morning’s public event.

In its lawsuit, the firm requested Lazada to immediately remove all relevant information of the stores selling the counterfeit books that the publisher has detected.

The publishing company also asked the e-commerce firm to take measures to manage, control, and prevent the sale of bogus books on its trading floor, as well as making sure bookstores and book vendors can prove the legal origin of the books being traded.

By the end of the same morning, Lazada had issued a press release which, however, did not directly respond to the allegations made by First News.

“All complaints related to counterfeit goods and fake products on the Lazada e-commerce trading floor will be handled in accordance with the current law,” the document reads.