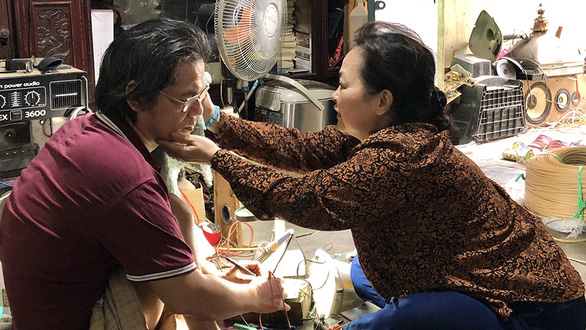 In Vietnam, paraplegic and able-bodied woman find true love in each other’s arms

Nguyen Ky Phong has everything far from what most women in Vietnam think of when they picture the perfect husband.

A paraplegic, Phong is unable to walk and has no assets.

But that has not stopped his able-bodied wife from spending two happy decades with him, and likely many more.

Duong Thi Thu Lieu, or Thu as she often goes by, had never imagined that she and Phong – from Ho Chi Minh City and five years her junior – would one day walk down the aisle.

With no money and permanently paralyzed from the waist down, Phong had all but given up on finding true love until he met 55-year-old Thu.

Now, after two decades of marriage life, the couple say they are more in love than ever and expect to spend the rest of their lives together.

According to Thu, she and Phong knew each other for 12 years before the realized they were in love.

Phong had been one of Thu’s younger sibling’s friends before they met, often dropping by their home in Ngoc Dinh Commune, Dinh Quan District, southern Dong Nai Province to say hello.

“I just thought of him like my younger brother. The thought of starting a relationship with him never crossed my mind,” Thu said with a smile.

During these visits, the pair began to get to know each other better until one day Thu asked Phong why he had not tried to start a family.

Phong answered that he believed no woman would ever willingly marry a handicapped man.

Thu felt bad, but decided there was nothing she could do.

Months later, Thu repeated the question, but this time Phong used the opportunity to confess his love for Thu.

“Actually I’ve long been in love with you,” Phong said to her.

“Seeing you having cared for your father [who suffers from complete paralysis] for years without a single complaint, I know you’re the woman of my dreams.”

His confession of love came as a surprise to Thu, leaving her at a loss for words.

“It’s not that I’m looking down on you for being poor or physically challenged,” Thu eventually answered.

“It’s just that you’re five years younger than me.

"If you were older than me, I’d say yes immediately.”

That was when Phong decided he would do everything in his power to win her over.

“I was just on top of the world when she finally said yes," Phong recounted.

"It took all my courage to propose.

“She was too beautiful and out of reach for a disabled man like me.”

Defying family opposition and ridicule from relatives and neighbors, the pair were declared man and wife in 2000.

“I love him, so I decided to marry him, despite the hardships that might await us,” Thu said, adding that she has never once regretted her decision to say yes though it did take several years for her to feel completely comfortable with judgment from strangers.

“Despite my love for him, I was not wholly committed to being his wife until two years later,” the woman said emotionally.

In 2001, the couple welcomed a completely healthy, beautiful baby daughter.

Phong contracted polio at age three and has been paralyzed in both legs ever since.

At age 10, he had to rely on neighbors for help and was forced to fend for himself after his father walked out on him and his mother remarried.

As a teenager, he did odd jobs around Ho Chi Minh City before relocating to Dong Nai, where he started a family with his wife and earns his living fixing electronic appliances.

When their daughter turned two, the couple moved in with Thu’s mother in their current home, where Phong runs his small electronics repair shop, occasionally offering his services for free to the needy or elderly.

Most of the family’s income comes from Thu, who does janitorial and delivery work to help make ends meet.

The intense love she has for her husband and daughter is what keeps her going through the family’s hardships.

The family was dealt a devastating blow in 2015, when Phong suffered a stroke, leaving his wife struggling to provide for her family and take care of her husband at the same time.

At the time, Thu was forced to make a modest income by delivering 140 kilogram sacks of cashew nuts to local household businesses.

Three years later, Phong finally recovered from the stroke just as Thu was hospitalized for two months with Spondylosis, a type of arthritis spurred by wear and tear to the spine.

Helpless over being unable to help out, Phong refused to eat or comb his hair.

“The two-month hospitalization was the only time I allowed myself to sit back and take rest,” Thu shared.

“Since I married him, I’ve always tried hard to provide for my family.”

As the years went by, Thu’s health faltered.

“My wife is so resourceful and loves her family dearly. She has taken on all the hard work to keep us fed and afloat since our lives got tangled,” Phong said, looking tenderly at his wife of 20 years.

Though Phong fails to act as the breadwinner, his wife has never regretted her choice and given it her all so that they can get on with their lives despite poverty and disability.

Duyen is now in her second year as an English major at a Ho Chi Minh City-based private university.