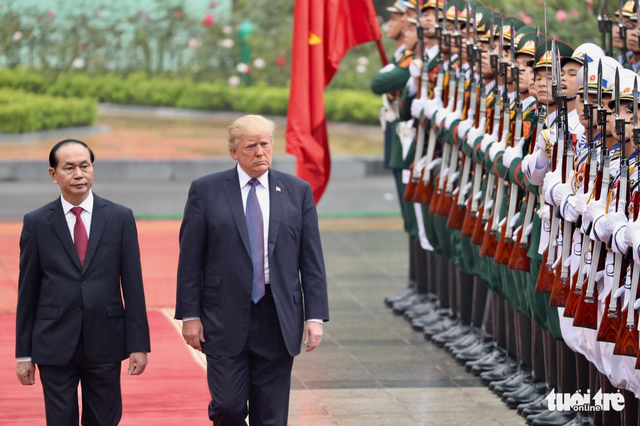 Hanoi and Washington have agreed over a free and open East Vietnam Sea for the international community, looking forward to a plan that a U.S. aircraft carrier will visit Vietnam for the first time next year.

At the end of this visit, the two sides issued a joint statement, in which they emphasized the importance of free and open access to the East Vietnam Sea, as well as “freedom of navigation and over-flight” in the maritime area.

China now claims most of the East Vietnam Sea without providing any legal ground.

Beijing even militarizes some reclaimed geographical features it seized from Vietnam in the past.

“Both leaders welcomed the plan for the first visit to a Vietnamese port by a United States aircraft carrier in 2018,” according to the joint statement.

President Quang and U.S. President Trump both “reaffirmed the importance of continued cooperation to address the legacies of war,” including “dioxin remediation at Da Nang Airport” in central Vietnam and “remediation at Bien Hoa Airport” in the southern region.

“The two leaders committed to cooperation in the removal of explosive remnants of war,” the joint statement reads.

Below is the full text of the joint statement:

1. At the invitation of President of the Socialist Republic of Viet Nam Tran Dai Quang, President of the United States of America Donald J. Trump paid a State visit to Ha Noi, November 11 – 12, 2017.  The two leaders discussed measures to strengthen and expand the Comprehensive Partnership between the two countries based on mutual understanding, shared interests, and a common desire to promote peace, cooperation, prosperity and security in the Indo-Pacific. Both leaders reaffirmed their commitment to deepening ties on the basis of previous Joint Statements between the two sides, respect for the United Nations Charter and international law, and each other’s independence, sovereignty, territorial integrity, and respective political systems.

2. President Trump congratulated Viet Nam on hosting a successful Asia Pacific Economic Cooperation Leaders’ Meeting in Da Nang. The two leaders reaffirmed their intent to continue high-level contacts and exchanges of delegations, and to strengthen existing dialogue mechanisms, including party-to-party dialogues. Both sides highlighted the expanding and mutually-beneficial economic relations between the United States and Viet Nam, and underscored their shared desire to create jobs and favorable conditions for commerce and business in both countries.

3. The two leaders pledged to deepen and expand the bilateral trade and investment relationship through formal mechanisms, including the Trade and Investment Framework Agreement (TIFA). They welcomed the return of market access for U.S. distiller’s dried grains into the Vietnamese market and new market access for Vietnamese star apples into the US market. They committed to seek resolution for remaining agricultural trade issues, including siluriformes, shrimp, mangos, and to promote free and fair trade and investment in priority areas, including electronic payment services, automobiles and intellectual property rights enforcement.

4. The two leaders welcomed the announcement of more than US$12 billion in new commercial agreements during President Trump’s visit. Both leaders also welcomed expanding bilateral energy ties, including discussions between companies from both sides on Viet Nam’s import of liquefied natural gas from the United States, as well as steps by Viet Nam to enhance its capacity for solar power generation with the support of the United States.

5. The two leaders underscored their commitment to deepen defense cooperation and shared resolve to address regional security challenges. President Tran Dai Quang thanked the United States government for the transfer of a Hamilton-class Coast Guard cutter to help improve Viet Nam’s maritime security and law enforcement capabilities. Both leaders welcomed the plan for the first visit to a Vietnamese port by a United States aircraft carrier in 2018. They affirmed the 2018 – 2020 Plan of Action for US – Viet Nam Defense Cooperation to implement the 2011 Memorandum of Understanding (MOU) on Advancing Bilateral Defense Cooperation and the 2015 Joint Vision Statement on Defense Relations, strengthening bilateral defense relations in areas of maritime security, humanitarian assistance and disaster relief, peacekeeping operations, and overcoming war legacy issues. In this regard, the two leaders welcomed the early visit of the US Secretary of Defense to Viet Nam.

6. The two leaders underscored that the two countries would deepen and gradually expand security and intelligence cooperation, enhancing information sharing and joint training on issues of mutual concern. The leaders expressed the intent to strengthen cooperation on cyber security through increased exchanges of delegations and information sharing, in order to promote an open and secure cyberspace. President Tran Dai Quang expressed interest in closer collaboration on aviation safety and security and counterterrorism.

7. Both leaders reaffirmed the importance of continued cooperation to address the legacies of war. In this regard, President Tran Dai Quang expressed appreciation for the United States’ contribution to the successful dioxin remediation at Da Nang Airport and welcomed the United States’ commitment to contribute to remediation at Bien Hoa Airport. He welcomed further US assistance for persons with disabilities. President Trump expressed his appreciation for Vietnam’s full and continued cooperation in accounting for U.S. personnel still missing from the war, and pledged to cooperate with Viet Nam in its efforts to locate its missing soldiers. The two leaders committed to cooperation in the removal of explosive remnants of war.

8. Both leaders affirmed their support for enhancing people-to-people ties to strengthen mutual understanding, cooperation and friendship between the two peoples, including through professional and academic exchanges, the launch of the Fulbright University Viet Nam, US$500.000 in Vietnam Education Foundation (VEF) alumni grants, and the arrival of the first ever Peace Corps volunteers in Viet Nam.

9. President Donald Trump and President Tran Dai Quang welcomed the exchange of agreed minutes on the intent of the United States to acquire the “D30” site in Ha Noi for the construction of a new Embassy facility, in accordance with the laws of both countries. President Donald Trump reiterated U.S. support for Viet Nam to acquire better diplomatic and consular facilities in the United States.

10. The two leaders recognized the importance of protecting and promoting human rights.

11. The two leaders discussed and welcomed initiatives to preserve peace and stability and to advance cooperation and development in the Indo-Pacific. They recognized the central role of the Association of Southeast Asian Nations (ASEAN) in the region, and pledged to respect and to support the centrality and unity of ASEAN in the evolving regional architecture. [Both sides expressed support for ASEAN to play a stronger role in addressing traditional and non-traditional security issues, such as terrorism, natural disasters and humanitarian crises, illegal drugs, and transnational criminal organizations]. Both sides committed to deepening the US – ASEAN Strategic Partnership based on the principles outlined in the 2016 Sunnylands Declaration. They welcomed the 50th anniversary of ASEAN’s founding and the 40th anniversary of ASEAN – US relations, and looked forward to commemorative activities, including the ASEAN – US Commemorative Summit in Manila on November 13, 2017.

12. Both leaders expressed grave concern over the DPRK’s nuclear weapons and ballistic missile programs and tests, which violate United Nations Security Council resolutions and threaten international peace and security. They urged all countries around the world to fully and strictly implement all relevant United Nations Security Council resolutions, and agreed to deepen bilateral cooperation to ensure their effective enforcement. The two leaders agreed on the importance of the peaceful denuclearization of the Korean Peninsula.

13. The two leaders underscored the strategic importance to the international community of free and open access to the South China Sea, the importance of unimpeded lawful commerce, and the need to respect freedom of navigation and over-flight, and other lawful uses of the sea. The two sides reiterated the stance on the South China Sea in the previous Viet Nam – U.S. and ASEAN – U.S. Joint statements, including their call on parties to refrain from escalatory actions, the militarization of disputed features, and unlawful restrictions on freedom of the seas. They reaffirmed their shared commitment to the peaceful settlement of disputes in accordance with international law, including full respect for legal and diplomatic processes. They called for the full and effective implementation of the Declaration on the Conduct of Parties in the South China Sea (DOC), and an early conclusion to an effective, legally binding Code of Conduct for the South China Sea (COC). They further called for all South China Sea claimants to clarify and comport their maritime claims in accordance with the international law of the sea as reflected in 1982 United Nations Convention on the Law of the Sea and to implement their international legal obligations in good faith in managing or resolving these disputes.

14. The leaders noted that, as a partner of the Mekong River Commission (MRC) and a founding member of the Lower Mekong Initiative (LMI), the United States supports the efforts of the Lower Mekong countries to sustainably manage the region’s water and environmental resources for the benefit of all. President Tran Dai Quang acknowledged the United States’ leading role in reducing global carbon emissions and innovating clean energy technologies, and thanked the United States for its assistance to Viet Nam in advancing climate mitigation and adaptation.”