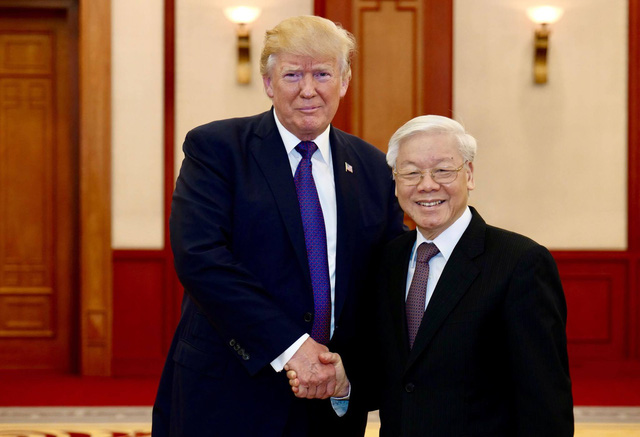 U.S. President Donald Trump said it was his “honor” to meet with Nguyen Phu Trong, General Secretary of the Communist Party of Vietnam, according to remarks posted on the White House’s website.

“Well, thank you very much. You are a man of great honor and respect, and it's an honor to be with you,” Trump said right before a meeting with Trong in Hanoi during his state visit on Sunday.

“And we want to thank Vietnam and the Vietnamese people. They have been so terrific. They greeted us with such respect and, really, such affection. The relationship is so healed.”

This was his first visit to Vietnam since formally assuming office in January this year.

“And to think where we were and where we've come is a tribute to both countries,” Trump said.

He added that trade was his focus when visiting Vietnam, believing it would thrive in the years to come.

“Trade has become a very important element of our relationship and it will continue onward,” he said. “And again, I want to thank you very much for this. It is a true honor to be with you.”

“We also want to thank you for helping us with the U.S. embassy site where we have a new embassy. And it will be something that, I think, will be very good for the future and the future of our two countries,” he said.

Trump mentioned North Korea as a continual problem and expressed his belief that China and Russia would help in this case.

He arrived in Vietnam on Friday for a CEO summit in Da Nang and left for Hanoi for a state visit on Saturday before concluding it on Sunday.

The U.S. billionaire-turned-president also offered “to mediate” when it comes to East Vietnam Sea issues with China.

“If I could help mediate or arbitrate, please let me know. I know we've had a dispute for quite a while with China. If I can help in any way, I'm a very good mediator and a very good arbitrator. I have done plenty of it from both sides. So if I can help you, let me know,” he said.

China claims most of the East Vietnam Sea and has reclaimed land in the areas it had seized from Vietnam, while militarizing these geographical features at the same time.

When meeting Vietnamese Prime Minister Nguyen Xuan Phuc the same day, Trump underlined a trade deficit with Vietnam, expressing his wish to “get that straightened out” promptly.

“Important to me is trade, because right now we have a very substantial trade imbalance with Vietnam – approximately $32 billion, which is a tremendous amount of money,” he said.

“So we want to get that straightened out very quickly.”

Trump added that Vietnam and the U.S. are going to have a fantastic relationship, and “[he looks] forward to it for many years to come.”