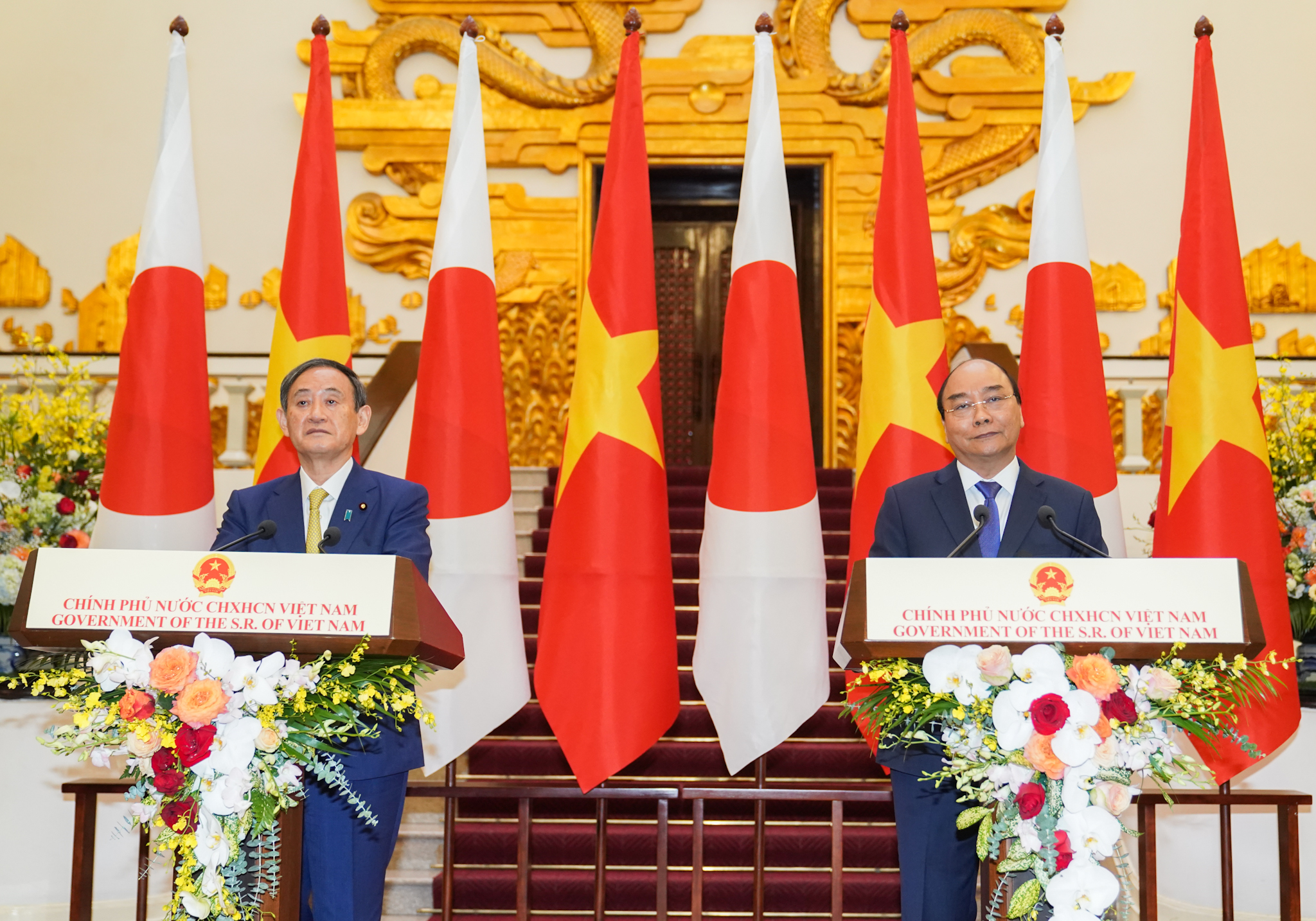 Vietnam is an important partner of Japan and plays a key role in realizing the Free and Open Indo-Pacific strategy, said Japanese Prime Minister Yoshihide Suga.

PM Suga made the above statement at a joint press briefing with his Vietnamese counterpart Nguyen Xuan Phuc following the pair’s summit meeting on Monday morning.

As an Indo-Pacific country, Japan will continue contributions to peace and prosperity in the region, Suga affirmed, adding that he chose Vietnam for his first foreign trip as the Southeast Asian country is the most proper destination for him to send out this message.

He said he had a productive meeting with PM Phuc, during which both sides compared notes on a wide range of issues in order to promote the trusted ties between the two countries amid the COVID-19 pandemic.

Japan has decided to provide emergency relief for Vietnam to help the country overcome consequences caused by heavy rains in its central region, pledging to continue sharing national disaster prevention experience with Vietnam, according to Suga.

Both sides agreed to tighten cooperation in regional matters, including the East Vietnam Sea issue, and basically reached consensus on an agreement on the transfer of defense equipment and technology, which is a big leap forward in their bilateral defense cooperation, the Japanese official said.

The two sides have signed a dozen documents on environment, energy, and development cooperation.

Phuc said he had a successful meeting with Suga as both sides agreed to strengthen political trust through regular exchange of visits and contacts as well as dialogues at all levels to promote cooperation across many fields, including defense, security, COVID-19 containment, and especially economy.

As the current ASEAN Chair and a non-permanent member of the United Nations Security Council, Vietnam welcomes Japan, a global power, to continue its active role and positive contributions to peace, stability, and prosperity in the region and the world.

Both sides re-affirmed the importance of ensuring peace, security, safety, and freedom of aviation and navigation in the East Vietnam Sea, beefing up settlement of disputes via peaceful measures, avoiding the use or threat of force, seriously abiding by international law, particularly the 1982 United Nations Convention on the Law of the Sea (UNCLOS), respecting diplomatic and legal processes, fully implementing the Declaration on the Conduct of Parties in the East Vietnam Sea, and early concluding a practical and effective code of conduct for the sea in line with the UNCLOS.