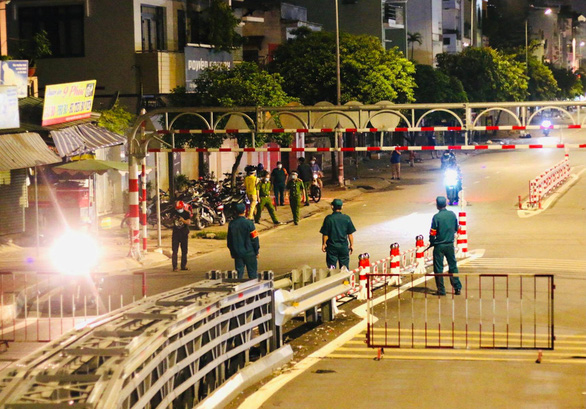 People in Ho Chi Minh City will be banned from going outdoors from 6:00 pm to 6:00 am the next day from Monday until further notice as part of the city’s restrictions to reduce surging COVID-19 infections, according to chairman Nguyen Thanh Phong.

Chairman Phong declared the travel restrictions at a meeting on Sunday evening.

All activities in the city will be suspended, save for emergencies and pandemic missions, the official underlined.

The municipal administration will issue an official document to detail the implementation of the new restrictions on Monday, Phan Van Mai, standing deputy secretary of the municipal Party Committee, said in another meeting earlier on Sunday.

On July 23, along with its extension of social distancing measures, introduced in late May, from Saturday until August 1, the administration also decided to tighten restrictions.

Such restrictions will be applied together with other epidemic control rules under the prime minister’s Directive 16, including the closure of non-essential businesses and services, a stay-home order, a ban on gatherings larger than two people, and the suspension of public transport.

Accordingly, residents are completely prohibited from going out, except for seeking medical treatment and buying food at designated points.

In high-risk areas, all households are required not to go out for food purchase as the local government will supply necessities to each of them.

Infections have shown no signs of slowing down in Vietnam, with 7,525 locally-infected patients logged nationwide on Sunday after a record was set at 9,225 domestic infections on Saturday, according to the Ministry of Health’s data.

Ho Chi Minh City accounted for 4,555 of the latest cases, followed by Binh Duong Province with 1,249 and Tay Ninh Province with 313.

The health ministry reported 1,755 recoveries on Sunday, bringing the total to 19,342 recovered patients. The death toll remains at 370.

More than 4.5 million vaccine shots have been administered to medical workers, teachers, factory workers, and other frontline staff since Vietnam rolled out inoculation on March 8.

About 372,000 people have been fully vaccinated.