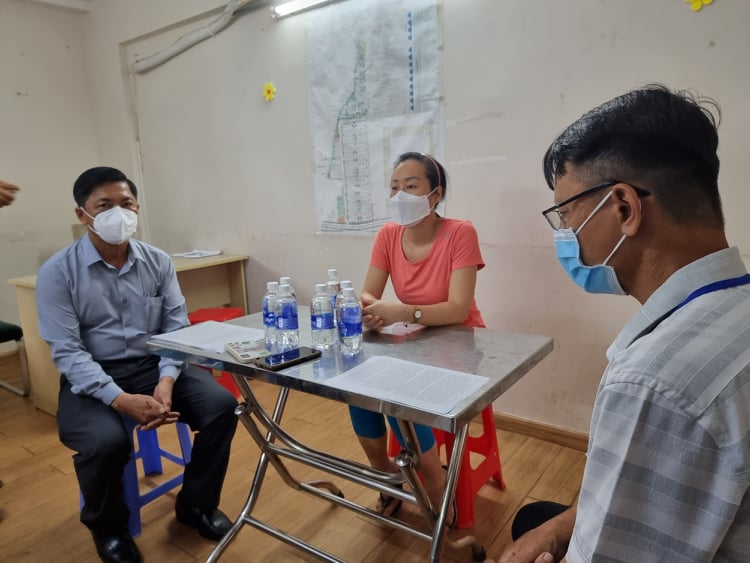 A ward leader from the southern Vietnamese province of Binh Duong apologized to a woman who was physically forced to take a COVID-19 test earlier this week.

A delegation of officials representing both Vinh Phu Ward and Thuan An City in Binh Duong held a working session with Hoang Thi Phuong Lan, a resident of the Ehome 4 apartment complex, on Wednesday.

At the meeting, Vo Thanh Quan, secretary of the Vinh Phu Party Committee and head of the ward’s steering committee for COVID-19 prevention and control, issued a public apology to Lan for the use of force during her COVID-19 testing process.

On Tuesday morning, Lan was teaching an online yoga class at her apartment when someone knocked on the door and requested that she provide a nasal swab for COVID-19 testing.

Lan said she had already conducted a COVID-19 test by herself, adding that she did not want to come into contact with others, and that she was in the middle of teaching a class.

A group of officials, police officers, and members of the apartment complex’s management board later forcefully opened the door of Lan’s apartment and took her to the building’s courtyard for nasal swab collection.

Several videos of the incident were shared to social media.

A representative of Vinh Phu Ward’s steering committee for COVID-19 prevention and control issued a statement the same day admitting to the use of force.

The representative also noted that Lan had refused to be sampled on several occasions and that her apartment is on the ground floor and at very high risk, as infections were once detected in her block.

Following the working session, the Thuan An City Party Committee stated that it plans to continue its investigation before releasing an official conclusion or issuing penalties to any parties found at fault.