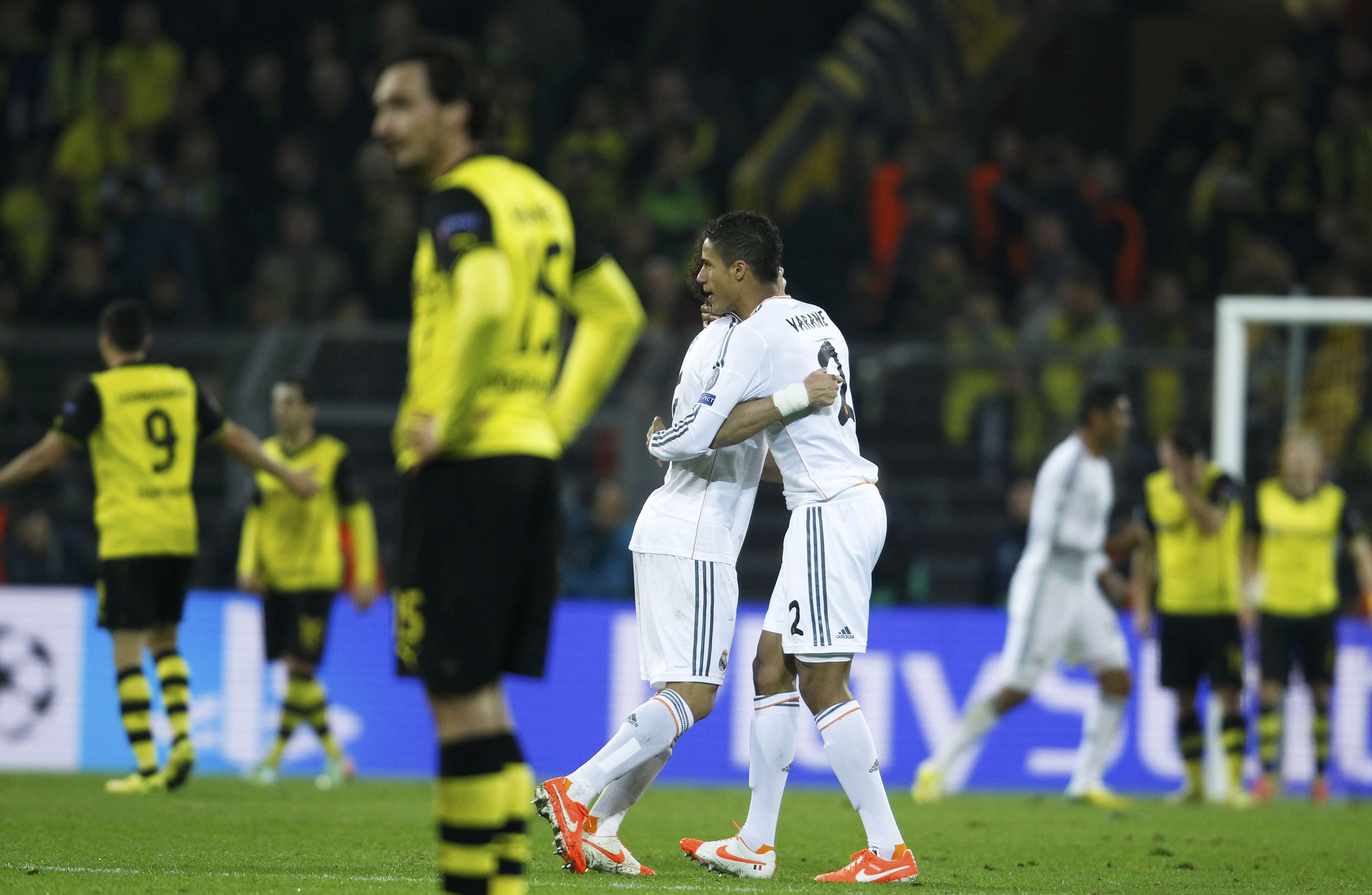 DORTMUND, Germany – Cristiano Ronaldo watched helplesly from the bench as Real Madrid scraped into the Champions League semi-finals by edging past a revitalised Borussia Dortmund 3-2 on aggregate after a 2-0 defeat on Tuesday.

Two first half goals by Marco Reus, both coming from Real mistakes, gave Dortmund a deserved lead as the Spaniards, who had a penalty saved in the 17th minute, were left mesmerised by the Germans' frantic pace on a rainy evening in the Ruhr valley.

Real, with top scorer Ronaldo left among the substitutes resting a minor knee injury, saw their 3-0 lead from the first leg in Madrid almost evaporate in a disastrous first half after Reus struck in the 24th and 37th minutes for the home side.

Dortmund also had a great chance to level the aggregate score but Henrikh Mkhitaryan's shot hit the post in the 65th.

"That was too much suffering and I think it was deserved," said Real keeper Iker Casillas. "But from time to time it's good to have this kind of wake up call that reminds us it's not always easy, and especially not in the Champions League.

"It is better that it happened in this game than in the decisive matches to come. We had to show quite a lot of mental strength because going 2-0 down by the 37th minute there were a lot of things going through our heads," he told Spain's TVE.

Real, who twice lost to Dortmund in Germany in last season's competition, including a 4-1 thrashing in the first leg of their semi-final, briefly recovered in the second half before the Germans, last season's runners-up, again surged forward, missing half a dozen clear chances before hitting the post.

The Spanish side's first-leg performance, however, carried them through to their fourth consecutive semi-final, leaving Dortmund to rue missed opportunities.

"We played a very slow game, with many errors and no confidence. After the penalty a bit of fear crept into the team,"Real coach Carlo Ancelotti told reporters, adding that Ronaldo was fit but he opted not to risk playing him.

"Every game is difficult at this stage and we saw that today. It was a night of struggling, of suffering but at the end we are just happy to have made it into the semis."

The Germans got off to a fiery start, looking for an early goal that could set them on their way.

Real, however, squandered a golden opportunity to take the lead and put the tie all but beyond the hosts when they were awarded a penalty for a handball by defender Lukasz Piszczek and Angel Di Maria had it saved by Roman Weidenfeller.

A minute later it was Dortmund's turn to miss with Mkhitaryan firing wide from close range but Reus made amends, pouncing on a defensive mistake by Pepe to slot in for the lead.

Mats Hummels almost added another as the hosts piled on the pressure but his well-timed header was palmed over the bar by Casillas.

Germany international Reus crashed in his second goal after he charged forward following another Real mistake, this time from Asier Illarramendi, fed striker Robert Lewandowski, who hit the post, and was left unmarked to drill in at the far post.

"You could make a video of this game and show it to the teams that lose a first leg 3-0," said Dortmund coach Juergen Klopp. "My players wanted to go through but we were missing that one goal we did not score in Madrid (last week).

"The lads gave it everything they had and I have no idea how many kilometres they ran today."

Real brought on Isco in the second half to control possession and they briefly succeeded as Dortmund lost some of their passing sharpness and pace.

Dortmund were lurking on the break and almost levelled the tie when Armenian Mkhitaryan rounded Casillas but only managed to hit the post in the 65th minute.

The Germans then poured forward, determined to score a third that would force extra time, but could not find the back of the net, exiting the competition with their heads held high and to a standing ovation from their fans in the 65,000 crowd.