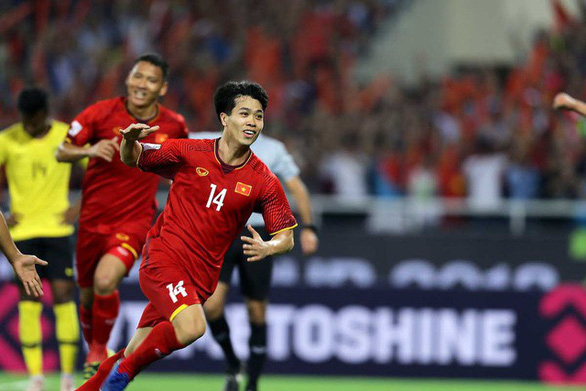 Vietnam, which will play in the semifinals of the 2018 AFF Championship this weekend against the Philippines after a four-game unbeaten streak, have finally returned to the world’s top 100 strongest teams in the FIFA World Rankings after a seven-year hiatus.

In the list, Vietnam sat at number 100 out of 211 ranked teams, currently the highest-ranked team from the Southeast Asian region.

Particularly, Vietnam gained four points to jump two notches from 102nd. The Golden Stars are also the only regional representative in the top 100.

The newest FIFA rankings were updated after Vietnam, Malaysia, Thailand, and the Philippines advanced into the semifinals of the ongoing 2018 AFF Championship.

The Philippines, Vietnam’s opponents in the second semifinal at the ASEAN competition, are ranked 114th while Thailand stand at 118th, Myanmar at 139th, Indonesia at 160th, Singapore at 165th, and Malaysia at 167th.

In the Asia and Pacific region, Iran are ranked the highest (29th), followed by Australia (41st) and Japan (50th).

Vietnam had an amazing run prior to the 2018 AFF Championship, which is being contested by ten nations affiliated to the ASEAN Football Federation from November 8 to December 15.

At the ongoing tournament, Vietnam reached the semifinals as Group A leaders after a four-game win streak and a clean sheen in the group stage.