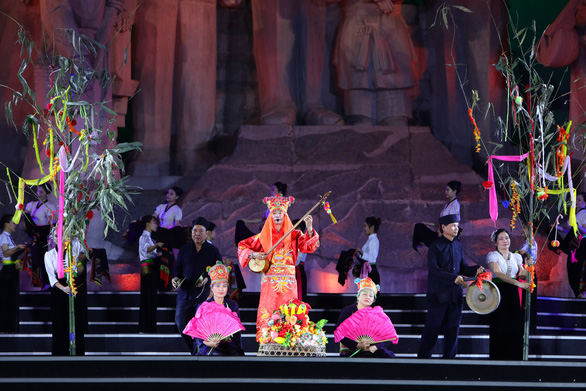 Vietnam on Saturday evening officially received a certificate to include the practices of Then by the Tay, Nung, and Thai ethnic communities in UNESCO’s Representative List of the Intangible Cultural Heritage of Humanity.

Then, which was inscribed on the Representative List of the Intangible Cultural Heritage of Humanity in 2019, reflects concepts about human beings, the natural world and the universe, UNESCO said on its website.

As explained by the UN agency, Then ceremonies describe a journey in which the Then Master (male or female) controls ghost soldiers traveling from the earth realm to the heaven realm to offer items of worship and present their prayers for peace, for treating illnesses, good crops, a happy new year, and more.

The Then Master starts the journey by singing and plucking a tính lute.

Depending on the worshipping purposes, Then Masters arrange worship trips to pray to different native Gods.

Then Masters use various items – such as a demon-expelling sword, a yin and yang rod, a bell, and others – to perform ceremonies in the believer’s house, outdoors or at the Then altar of the Master’s house.

The Master wears a ceremonial dress, sings in the language of their ethnic group, plays the tính lute, shakes rattle-bells, and waves a fan.

Some ceremonies are accompanied by a female dancing group.

Then is always transmitted orally while its rituals are conducted, reflecting its succession between the generations, and Then Masters play a key role in passing on the related skills and know-how, with some conducting around 200 ceremonies a year.

According to UNESCO representative in Vietnam Christian Manhart, the practice of Then helps people overcome difficulties and obstacles in daily life, contributes to moral education, humane lifestyle, and preserves the positive lifestyle of the Tay, Nung, and Thai communities.

In the current context where people cannot avoid difficulties and worries as the earth and society are changing, the cultural expressions of Then practices have become important and helped enhance communication between individuals and communities, he said.

Speaking at the ceremony to receive the certificate in Tuyen Quang, Vietnamese State President Nguyen Xuan Phuc considered the Then practice recognition as a 'national brand' which can help introduce international friends to the unique cultural heritage of the northern mountainous region of Vietnam, making this area more appealing to tourists.

The president also requested the 11 provinces which are home to Then to build programs to extensively, creatively, and effectively promote the ritual practice, while raising people’s awareness of cultural identity.

The provinces should create favorable conditions for artisans to educate future generations and continue to collect, store, and publish ancient Then books.

The diversity of Then in each ethnic group in each locality should also be respected.

“In the process of preservation and development, the Then practice must not be abused or transformed for profit,” he emphasized.