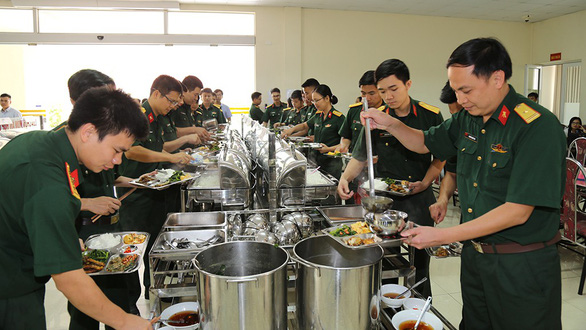 A weaponry factory in northern Vietnam has built its own ‘spa’ where workers enjoy free herbal baths and massages to cleanse their body of harmful toxins from work.

The Z131 factory, located in the northern province of Thai Nguyen, is a key weapon manufacturing plant of the defense ministry’s General Department of Defense Industry.

It is responsible for producing weapons, ammunition and other equipment for the Vietnamese military.

With its revenue topping VND1.4 trillion (US$59.75 million) in 2018, the factory has found ways to make sure its personnel receive the best possible rewards for their dedication.

Apart from a monthly salary of VND13 million ($555) on average, workers at Z131 also enjoy other perks including regular spa-like treatments to detoxify their body and daily buffets to recharge.

“At our factory, we have buffets for lunch instead of traditional portioned meals,” said Pham Anh Dao, a female worker at the Z131 factory.

“It’s like [staying at] a hotel or resort. It’s amazing.”

Z131 is the first arm of the General Department of Defense Industry to introduce buffets to its personnel, an idea that was initiated in 2016 by the factory’s director Ngo Minh Khai.

The factory’s 1,000-strong personnel get to choose from nearly a dozen options of food as well as a selection of desserts and fresh juice types for lunch every day.

At full moon and on the first day of each lunar month, vegetarian dishes are available to cater to Buddhist followers.

“Before buffets were introduced, there would be a lot of leftovers after each lunch,” said Dinh Xuan Thanh, an explosive line operator at the Z131 factory.

“Now that we get to choose what we eat, everyone finishes their meal and there are no more leftovers,” Thanh said.

He added the change has generated new excitement among the workers, who now look forward to lunch every day to see what is on the menu.

“Our cooks are strenuously selected from many applicants so their food never disappoints,” Dao said.

Z131 workers also regularly get to enjoy “special meals” with added nutrition to keep them in top form for the best performance, Dao said.

Since 2017, Z131 has operated a facility providing detoxification treatments to its workers who are regularly exposed to harmful toxins as part of their job.

A worker is entitled to one to two treatment routines every year, each including herbal baths, whirlpool baths, Himalayan salt sauna, essential oil sauna, a full-body massage, and zone therapy.

The facility boasts state-of-the-art equipment while all herbs used in the treatment routines are home-grown by the Vietnamese military.

“There’s no investment more essential than that in the health of our workers,” said Captain Dao Quoc Hung, president of the factory’s Youth Union organ.

Before the detoxification facility was launched, Z131 workers had to travel all the way to Hanoi – 73 kilometers from Thai Nguyen – to undergo the routine at a military hospital in the Vietnamese capital.

“Before, only those who had worked for the factory for at least 30 years were entitled to the herbal baths,” Thanh said.

“Now that we have our own facility, everyone take turns in enjoying the baths,” he added.

A routine typically lasts for two weeks, and its effect on the body is described as “magical” by many workers.

“All the toxins that your body has accumulated during the year get discharged through these treatments,” explosive line operator Thanh said.

“It only takes a week of treatment for you to notice the positive effects. It’s incredible.”

For a woman in her 40s who works with harmful chemicals every day, maintaining top-form health is something Dao is profoundly thankful for.

“I don’t think any other factory provides the same benefits as we get at Z131,” she said.

The factory is looking to build an outdoor sports complex for its workers to unwind after a hard day of work, according to Captain Hung.

“You can’t just give someone money and expect them to perform well at work,” Hung said.

“Rejuvenating workers’ energy is just as important,” he added.

Some workers at Z131 have passed on their love for the work to their children, who follow in their parents’ footsteps in becoming employees at Z131.