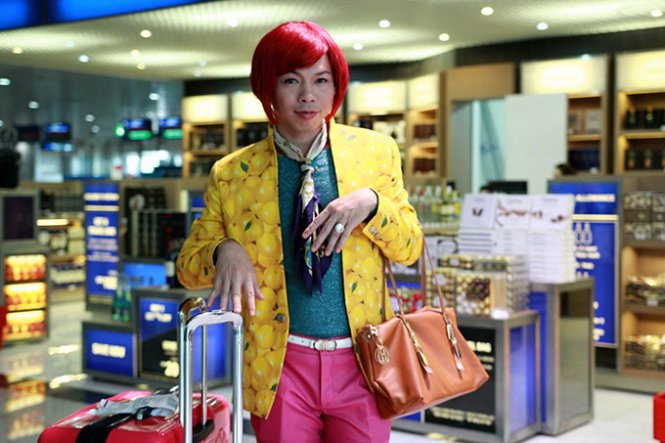 It is not difficult to find gay characters on Vietnamese screens nowadays, but the way filmmakers depict them has become a bone of contention.

The most recent film, “De Hoi Tinh” (Let Hoi Take Care of It), has created mixed opinions over the use of gay characters on the silver screen.

Ubiquitous on the screen

In local movies, most gay characters are used for humor, which means creating laugh-worthy moments, helping audiences to relax between dramatic scenes.

Gays are often described as hilarious, jovial people who say and act in a funny way. However, in some cases, these characters overact while flirting, groping other men, saying dirty words or being too effeminate, leaving a bad impression on viewers over both the film and gay people.

In the movie “Trai Nhay” (Dancing Boys), released in 2007, the character Dung Tony (played by Duc Hai) received negative feedback as he wore red nail polish and lipstick, which was considered inappropriate for Vietnamese men.

In 2011, “Cam Hung Hoan Hao” (Perfect Inspiration) was also criticized as it gave an incorrect definition of homosexuality, calling it a “sickness” while using bad words that discriminated against the gay community.

In “De Hoi Tinh,” Pham Huong Hoi, the main character, who does not hesitate to call himself “bong” (gay) in front of other people and act in an offensive way, caused backlash from the Vietnamese LGBT (Lesbian, Gay, Bisexual, and Transgender) community immediately after its official release on December 13.

On a Facebook page named “Toi Dong Y” (I Agree) which aims to support LGBT rights and has around 82,000 fans, many people used the hashtag “Hoikhongthetinh” (Hoi Cannot Take Care of It) to protest against the film, accusing it of humiliating and smearing gay people through overacted actions and expressions.

There are, however, movies that have received positive feedback from viewers for creating a good impression of gay people.

In 2012 the film “Lost in Paradise” about Khoi (played by Ho Vinh Khoa), an innocent 20-year-old gay man who travels to Ho Chi Minh City from the countryside to begin a new life, helped local audiences gain a new, empathetic viewpoint toward gay people and won praise from the LGBT community.

Although “De Hoi Tinh” has not been supported by LGBT people, the film still attracts many viewers and is able to touch the audiences’ hearts by showcasing the image of a kind gay man who sacrifices his own feelings for the happiness of his love.

It is considered a respectful movie that reveals many unknown aspects of LGBT people, including the difficulties they face earning a living and their hopes of finding true love and happiness at the end of their journey.

The producer initially planned to show the film 16 times between December 13 and 21 in Ho Chi Minh City, however the firm decided to add another 12 screenings from December 22 to 28 because it has been well-received by city audiences.

The restaurant owners are planning to serve up ‘banh mi’ via drive-thru at multiple locations in Houston, Texas