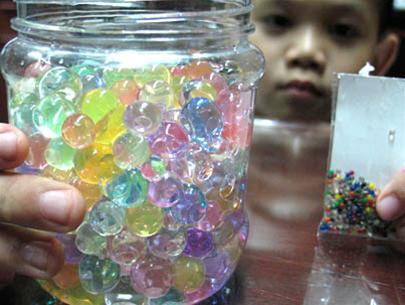 A three-year-old girl from the coastal province of Binh Thuan was saved from bowel obstruction after a water bead that had been blocking her intestine was successfully removed, doctors at the Ho Chi Minh City Nhi Dong 1 Hospital said on Tuesday.

The operation to remove the foreign object from the bowels of the patient, B.T.K.L., was a success, confirmed the hospital’s deputy director, Dr. Dao Trung Hieu.

L. was hospitalized on May 10 after she swallowed a Chinese water bead, a toy her mother said is sold widely in her locality, according to doctors.

The toy is in the shape of dry, tiny beads that expand to a far bigger size when sprayed with water.

“Many stores at my place sell this toy and other parents also buy it for their children,” said the mother, Nguyen Thi Kim Thuy.

The water bead is extremely dangerous for children as the kids are likely to swallow the small objects, warned Dr. Hieu.

“After swallowed, the beads will expand and thus cause bowel obstruction for the children,” he said.

“The toy can even kill the kids if the beads fall into their respiratory system,” he added.

The water beads are similar to the Bindeez, or Aqua Dots, the children’s toy that was manufactured in China for the Australian-owned Moose Enterprise P/L.

The toy allows children to create various multi-dimensional designs using small colored beads. The beads are arranged into various designs on a plastic tray. When the beads are sprayed with water, their surfaces become adhesive and they fuse together.

Bindeez were distributed in 40 countries, and 12 million packets, containing more than 8 billion beads, have been sold worldwide, according to the Guardian.

In 2007 the toy was subject to a multi-national product recall after it was discovered that the Wangqi Product Factory in Shenzhen, China had used a cheap chemical that was a pharmacologically active sedative prodrug, resulting in the illness and hospitalization of several children who ingested the beads, according to Chinese News Agency.

In Vietnam, meanwhile, doctors have repeatedly warned that the beads can harm children.

“As the toys are sold at throwaway prices, the manufacturers may have used cheap chemicals and toxic substances during production,” said Do Thanh Bai, director of the Center of Environment and Chemical Safety.