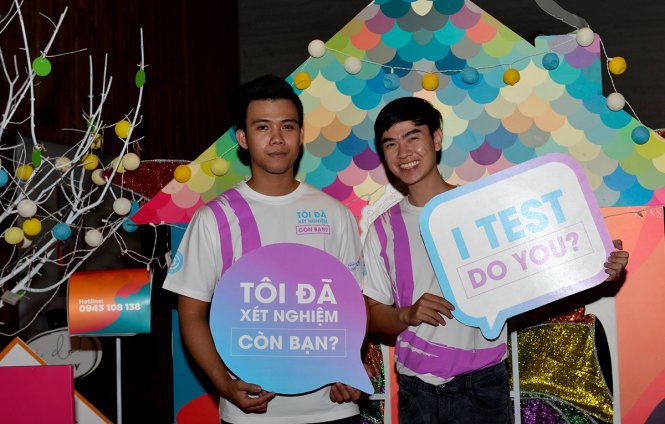 An HIV self-testing service, the first of its kind in Vietnam, was launched in Ho Chi Minh City on Friday, providing local people with a fast, safe and private diagnostic method.

The home testing kit allows users to interpret their own results after taking a mouth swab or finger prick.

The service is an initiative of the Healthy Market program which is jointly organized by the U.S. President's Emergency Plan for AIDS Relief (PEPFAR), the United States Agency for International Development (USAID), the non-profit PATH organization, and Vietnam’s Ministry of Health.

Being the high-risk group of contracting HIV, the LGBT community in Vietnam greatly welcomes the HIV self-testing kit, as being able to know whether they are HIV-positive or not in a discreet way is very important to them.

“I used the HIV self-testing kit which analyzes the finger prick before, but this time, I took a mouth swab,” Nguyen Huu Toan, nicknamed Jessica, said at a ceremony to launch the service.

“Both ways are convenient and I feel very comfortable and private when doing that.

“Another advantage is that I can know the result quickly.”

Jessica runs a beauty salon and employs six LGBT workers, all of whom have used the HIV self-testing service.

These users said the kit is easy to use, plus the instruction is written clearly while the result comes quickly.

He said testing HIV has never been easy like this.

Dr. Vi Ngoc Bao, vice president of the Healthy Market program, said 377 people have used the self-testing kit since May 2016

“Of those, 7 percent are HIV-positive and the affected people are currently under treatment,” he added.

The HIV self-testing program in Vietnam is launched with many goals, including having 90 percent of HIV-positive people to know their condition by 2020.

According to Dr. Nguyen Hoang Long, director of the Vietnam HIV/AIDS Prevention Department, the launch of the program gives more and more people access to a fast, simple, and reliable HIV testing service.

The service will help more people know whether they are HIV-positive or not.

The kit will be sold in pharmacy stores like other self-testing ones such as the pregnancy test and the diabetes testing kit.

The HIV self-testing kit has been introduced in various countries such as the U.K., the U.S.A., France, China, Malaysia, and the Philippines.