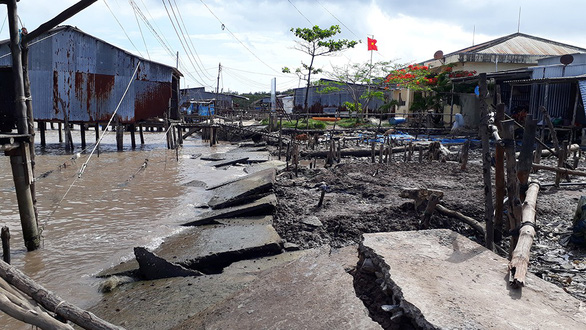 Different areas in Vietnam’s Mekong Delta have been affected by severe subsidence, prompting local authorities to evacuate residents in at-risk neighborhoods as soon as possible.

Many people in the delta, dubbed the country’s rice granary, have lost their entire homes to land collapse, and the situation is expected to worsen in the coming time.

Dat Mui Commune in Ngoc Hien District, Ca Mau Province is among the localities that suffer the heaviest damage.

Most of the hundreds of households that used to live in the coastal commune have already relocated to other locations, and only a few families decided to stay and hang on to their traditional livelihood of catching and raising fish.

Aside from houses, a large area of protection forests, whose role is to mitigate coastal erosion, has also disappeared due to subsidence.

According to Lam Truong An, a Ca Mau-based engineer and irrigation official, relocating residents is just a temporary solution.

If no assertive measures are taken, subsidence will continue affecting other neighborhoods in the province, An stated.

Su said Ca Mau loses an area the size of a commune to subsidence every year, with land along local coastlines and riverbanks most vulnerable.

Local authorities will first focus on evacuating affected residents to ensure their safety as well as on stabilizing their lives following the relocation, said Nguyen Tien Hai, chairman of Ca Mau.

Suitable embankments are expected to be constructed to cope with the situation, Hai added.

As flooding and high tides will occur more frequently until the end of the year, the problem is likely to be exacerbated and will negatively impact locals’ lives and production.

Prime Minister Nguyen Xuan Phuc has tasked the Ministry of Natural Resources and Environment with monitoring subsidence along the coast and rivers in the Mekong Delta, as well as proposing short-term and long-term solutions.