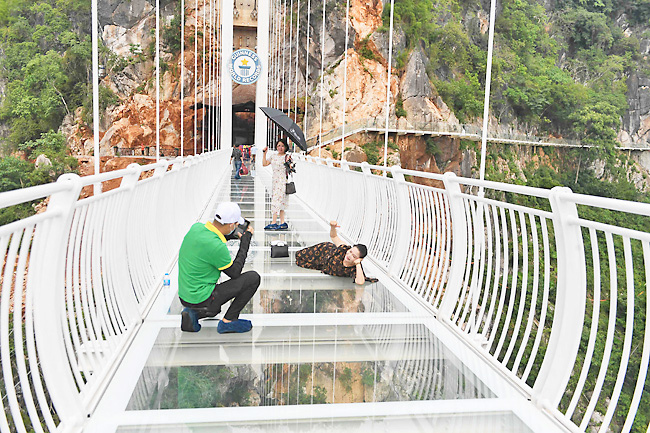 Vietnam launched a new attraction for tourists with a head for heights yesterday, with the opening of a glass-bottomed bridge suspended 150 metres above a lush jungle.

The floor of the bridge is made from French-produced tempered glass, making it strong enough to support up to 450 people at a time, while giving them a spectacular view of the greenery in the gorge far below.

“When standing on the bridge, travellers will be able to admire the beauty of nature,” a representative of the bridge’s operator Hoang Manh Duy said. The company said it is the world’s longest glass-bottomed bridge, surpassing a 526-metre structure in Guangdong, China.

Officials from Guinness World Records are expected to verify the claim next month.

Vietnamese tourism chiefs are seeking to lure visitors back after two years of COVID-19 shutdowns that kept out foreign travellers.

In mid-March, the country ended quarantine for international visitors and resumed 15 days of visa-free travel for citizens from 13 countries.

“I hope the bridge will lure more domestic and international tourists to our area,” local resident Bui Van Thach said after walking across it.